Divide and Conquer – the future of Syria?

More insights from Sharmine Narwani that highlight the complexity of Syria’s position.

When George Galloway spoke recently at the Sydney Town Hall he reminded us that the ‘divide and conquer’ strategy that seems to be at the heart of US’ Middle East policy is nothing new. “How do you think England last century manged to control 600,000,000 Indians with only 60,000 British troops?” he asked us!

So long as the Arab states remain divided and absorbed in sectarian squabbles the reigning superpower has nothing to worry about. Israel will retain its hegemony in the region, the Palestinian Occupation will continue on indefinitely, and Syria will continue to blaze until  nothing is left! 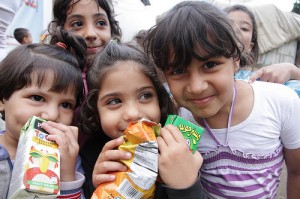 Those who pay the price of war – syrian refugees

At the heart of all politics lies cold, hard opportunism. New circumstances, changed alliances and unexpected events will always conspire to alter one’s calculations to benefit a core agenda.

In the Middle East today, those calculations are being adjusted with a frequency unseen for decades.

In Egypt and Syria, for instance, popular sentiment is genuinely divided on where alliances and interests lie. Half of Egyptians seem convinced that deposed President Mohammed Mursi is the resident US-Israeli stooge, while the other half believe it is Egypt’s military that is carrying out those foreign agendas.

In Syria the same can be said for Syrians conflicted on whether President Bashar al-Assad or the external-based Syrian National Council (SNC) most benefits Israeli and American hegemonic interests in the region.

But Egyptians and Syrians, who point alternating fingers at Islamists or the state as being tools of imperialism, have this wrong: Empire is opportunistic. It has ways to benefit from both.

There is another vastly more destructive scenario being missed while Arabs busy themselves with conspiracies and speculative minutiae: A third option far more damaging to all.

At a June 19 event at the University of Michigan’s Gerald R. Ford School of Public Policy, former US Secretary of State Henry Kissinger touched upon an alarming new refrain in western discourse on Mideast outcomes; a third strategy, if all else fails, of redrawn borders along sectarian, ethnic, tribal or national lines that will shrink the political/military reach of key Arab states and enable the west to reassert its rapidly-diminishing control over the region. Says Kissinger about two such nations:

“There are three possible outcomes (in Syria). An Assad victory. A Sunni victory. Or an outcome in which the various nationalities agree to co-exist together but in more or less autonomous regions, so that they can’t oppress each other. That’s the outcome I would prefer to see. But that’s not the popular view…First of all, Syria is not a historic state. It was created in its present shape in 1920, and it was given that shape in order to facilitate the control of the country by France, which happened to be after UN mandate…The neighboring country Iraq was also given an odd shape, that was to facilitate control by England. And the shape of both of the countries was designed to make it hard for either of them to dominate the region.”

While Kissinger frankly acknowledges his preferred option of “autonomous regions,” most western government statements actually pretend their interest lies in preventing territorial splits. Don’t be fooled. This is narrative-building and scene-setting all the same. Repeat something enough – i.e., the idea that these countries could be carved up – and audiences will not remember whether you like it or not. They will retain the message that these states can be divided.

It is the same with sectarian discourse. Western governments are always warning against the escalation of a Sunni-Shia divide. Yet they are knee-deep in deliberately fueling Shia-Sunni conflicts throughout the region, particularly in states where Iran enjoys significant influence (Lebanon, Syria, Iraq) or may begin to gain some (Egypt, Bahrain, Yemen).

“Seeding” Sectarianism to Break Up States

If ever a conspiracy had legs, this one is it. Stirring Iranian-Arab and Sunni-Shiite strife to its advantage has been a major US policy objective since the 1979 Islamic Revolution in Iran.

Wikileaks helped shed light on some of Washington’s machinations just as Arab uprisings started to hit our TV screens.

A 2006 State Department cable that bemoans Syrian President Bashar al-Assad’s strengthened position in Syria outlines actionable plans to sow discord within the state, with the goal of disrupting Syrian ties with Iran. The theme? “Exploiting” all “vulnerabilities”:

“PLAY ON SUNNI FEARS OF IRANIAN INFLUENCE: There are fears in Syria that the Iranians are active in both Shia proselytizing and conversion of, mostly poor, Sunnis. Though often exaggerated, such fears reflect an element of the Sunni community in Syria that is increasingly upset by and focused on the spread of Iranian influence in their country through activities ranging from mosque construction to business. Both the local Egyptian and Saudi missions here, (as well as prominent Syrian Sunni religious leaders), are giving increasing attention to the matter and we should coordinate more closely with their governments on ways to better publicize and focus regional attention on the issue.”

Makes one question whether similar accusations about the “spread of Shiism” in Egypt held any truth whatsoever, other than to sow anti-Shia and anti-Iran sentiment in a country until this month led by the Sunni Muslim Brotherhood.

A 2009 cable from the US Embassy in Riyadh, Saudi Arabia continues this theme. Mohammad? Naji al-Shaif, a tribal leader with close personal ties to then-Yemeni President Ali Abdallah ?Saleh and his inner circle says that key figures “are privately very skeptical of Saleh’s? claims regarding Iranian assistance for the Houthi rebels”:

Shaif told? EconOff on December 14 that (Saudi Government’s Special Office for? Yemen Affairs) committee members privately shared his view that Saleh was providing false or exaggerated? information on Iranian assistance to the Houthis in order to? enlist direct Saudi involvement and regionalize the conflict. Shaif said that one committee member told him that “we know? Saleh is lying about Iran, but there’s nothing we can do ?about it now.”

That didn’t stop Secretary of State Hillary Clinton lying through her teeth to a Senate Committee a few short years later: “We know that they – the Iranians are very much involved in the opposition movements in Yemen.”

US embassy cables from Manama, Bahrain in 2008 continue in the same vein:

“Bahraini government officials sometimes privately tell U.S. official visitors that some Shi’a oppositionists are backed by Iran. Each time this claim is raised, we ask the GOB to share its evidence. To date, we have seen no convincing evidence of Iranian weapons or government money here since at least the mid-1990s… In post’s assessment, if the GOB had convincing evidence of more recent Iranian subversion, it would quickly share it with us.”

Yet as Bahraini rulers continue to violently repress peaceful protest in the Shia-majority state two years into that country’s popular uprising, their convenient public bogeyman mirrors that of Washington: Iranian interference.