Iran – the real target of the US attack on Syria

Posted on September 5, 2013 by fatherdave

Another frank and common-sense analysis by Robert Fisk.

Fisk is surely right about Iran being the real target of US aggression. It is Iran that threatens US/Israeli control of the region and not it’s allies – Syria and Lebanon – but the US know that if they take out Syria they destroy Lebanon too (through the uncontrollable influx of refugees) and so they will leave Iran naked and vulnerable.

There is another factor that Fisk doesn’t mention here – the fact that Bashar Al-Assad has embarrassed Obama. The US President said two years ago that Assad had to go and yet he’s still there! This is an unforgivable insult to the country that considers itself to be in charge of the world and to its king! 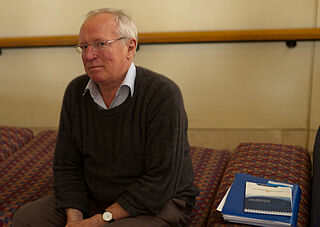 Iran, Not Syria, Is the West’s Real Target

Iran is ever more deeply involved in protecting the Syrian government. Thus a victory for Bashar is a victory for Iran. And Iranian victories cannot be tolerated by the West

Before the stupidest Western war in the history of the modern world begins – I am, of course, referring to the attack on Syria that we all yet have to swallow – it might be as well to say that the cruise missiles which we confidently expect to sweep onto one of mankind’s oldest cities have absolutely nothing to do with Syria.

Iran is Israel’s enemy. Iran is therefore, naturally, America’s enemy. So fire the missiles at Iran’s only Arab ally.

There is nothing pleasant about the regime in Damascus. Nor do these comments let the regime off the hook when it comes to mass gassing. But I am old enough to remember that when Iraq – then America’s ally – used gas against the Kurds of Hallabjah in 1988, we did not assault Baghdad. Indeed, that attack would have to wait until 2003, when Saddam no longer had any gas or any of the other weapons we had nightmares over.

And I also happen to remember that the CIA put it about in 1988 that Iran was responsible for the Hallabjah gassings, a palpable lie that focused on America’s enemy whom Saddam was then fighting on our behalf. And thousands – not hundreds – died in Hallabjah. But there you go. Different days, different standards.

And I suppose it’s worth noting that when Israel killed up to 17,000 men, women and children in Lebanon in 1982, in an invasion supposedly provoked by the attempted PLO murder of the Israeli ambassador in London – it was Saddam’s mate Abu Nidal who arranged the killing, not the PLO, but that doesn’t matter now – America merely called for both sides to exercise “restraint”. And when, a few months before that invasion, Hafez al-Assad – father of Bashar – sent his brother up to Hama to wipe out thousands of Muslim Brotherhood rebels, nobody muttered a word of condemnation. “Hama Rules” is how my old mate Tom Friedman cynically styled this bloodbath.

Anyway, there’s a different Brotherhood around these days – and Obama couldn’t even bring himself to say “boo” when their elected president got deposed.

But hold on. Didn’t Iraq – when it was “our” ally against Iran – also use gas on the Iranian army? It did. I saw the Ypres-like wounded of this foul attack by Saddam – US officers, I should add, toured the battlefield later and reported back to Washington – and we didn’t care a tinker’s curse about it. Thousands of Iranian soldiers in the 1980-88 war were poisoned to death by this vile weapon.

I traveled back to Tehran overnight on a train of military wounded and actually smelled the stuff, opening the windows in the corridors to release the stench of the gas. These young men had wounds upon wounds – quite literally. They had horrible sores wherein floated even more painful sores that were close to indescribable. Yet when the soldiers were sent to Western hospitals for treatment, we journos called these wounded – after evidence from the UN infinitely more convincing than what we’re likely to get from outside Damascus – “alleged” gas victims.

So what in heaven’s name are we doing? After countless thousands have died in Syria’s awesome tragedy, suddenly – now, after months and years of prevarication – we are getting upset about a few hundred deaths. Terrible. Unconscionable. Yes, that is true. But we should have been traumatized into action by this war in 2011. And 2012. But why now?

I suspect I know the reason. I think that Bashar al-Assad’s ruthless army might just be winning against the rebels whom we secretly arm. With the assistance of the Lebanese Hezbollah – Iran’s ally in Lebanon – the Damascus regime broke the rebels in Qusayr and may be in the process of breaking them north of Homs. Iran is ever more deeply involved in protecting the Syrian government. Thus a victory for Bashar is a victory for Iran. And Iranian victories cannot be tolerated by the West.

And while we’re on the subject of war, what happened to those magnificent Palestinian-Israeli negotiations that John Kerry was boasting about? While we express our anguish at the hideous gassings in Syria, the land of Palestine continues to be gobbled up. Israel’s Likudist policy – to negotiate for peace until there is no Palestine left – continues apace, which is why King Abdullah of Jordan’s nightmare (a much more potent one than the “weapons of mass destruction” we dreamed up in 2003) grows larger: that “Palestine” will be in Jordan, not in Palestine.

But if we are to believe the nonsense coming out of Washington, London, Paris and the rest of the “civilised” world, it’s only a matter of time before our swift and avenging sword smiteth the Damascenes. To observe the leadership of the rest of the Arab world applauding this destruction is perhaps the most painful historical experience for the region to endure. And the most shameful. Save for the fact that we will be attacking Shia Muslims and their allies to the handclapping of Sunni Muslims. And that’s what civil war is made of.