Most of us have been waiting for this sort of evidence to emerge. It’s Saddam Hussein’s ‘weapons of mass destruction’ all over again!

The new information was published on mcclatchydc.com… on January 15th and was picked up quickly by RT and other alternate media, but I have a feeling that it won’t be getting a lot of attention in U.S. mainline media.

The statement of Theodore Postol – professor at the Massachusetts Institute of Technology (MIT) – says it all: “The administration narrative was not even close to reality. Our intelligence cannot possibly be correct.”

It would be hard to overestimate the seriousness of this indictment on the Obama administration. To think that the US was about to rain death on Damascus and possibly intensify the conflagration such that millions more might have died, and all this was to be done on the basis of ‘sure and certain’ evidence that turns out to be ‘not even close to reality’!

Of course Obama didn’t really believe in the Syrian government’s culpability any more than George Dubya really believed in Saddam’s WMD’s. But will either of these man ever be forced to answer for the blood that’s been shed on the basis of their lies? 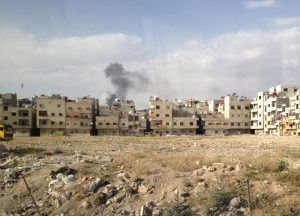 A new MIT report is challenging the US claim that Assad forces used chemical weapons in an attack last August, highlighting that the range of the improvised rocket was way too short to have been launched from govt controlled areas.

In the report titled “Possible Implications of Faulty US Technical Intelligence,” Richard Lloyd, a former UN weapons inspector, and Theodore Postol, a professor at the Massachusetts Institute of Technology (MIT), examined the delivery rocket’s design and calculated possible trajectories based on the payload of the cargo.

The authors concluded that sarin gas “could not possibly have been fired at East Ghouta from the ‘heart’, or from the Eastern edge, of the Syrian government controlled area shown in the intelligence map published by the White House on August 30, 2013.”

Based on mathematical calculations, Lloyd and Postol estimate the rocket with such aerodynamics could not travel more than 2 kilometers. To illustrate their conclusion, the authors included the original White House map that depicted areas under Assad control and those held by the opposition. Based on the firing range and troop locations on August 21, the authors conclude that all possible launching points within the 2 km radius were in rebel-held areas.

“This mistaken intelligence could have led to an unjustified US military action based on false intelligence. A proper vetting of the fact that the munition was of such short range would have led to a completely different assessment of the situation from the gathered data,” the report states.

The authors emphasize that the UN independent assessment of the range of the chemical munition is in “exact agreement” with their findings.

The report goes on to challenge the US Secretary of State’s key assessments of the chemical attack that he presented to the American people on August 30th and to the Foreign Relations Committee on September 3rd in an effort to muster a military attack on Syria.

“My view when I started this process was that it couldn’t be anything but the Syrian government behind the attack. But now I’m not sure of anything. The administration narrative was not even close to reality. Our intelligence cannot possibly be correct,” Postol told McClatchy publication.

read the rest of this story here