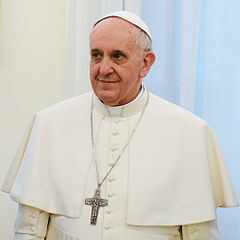 Pope Francis: Contemplate Jesus’ Suffering in the People of Syria

This morning, Pope Francis met with humanitarian and relief organizations that are dealing with the ongoing crisis in Syria. The meeting was organized by the Pontifical Council “Cor Unum”, which coordinates the Church’s charity work.

Among the participants were representatives of the following Catholic charity organizations: Aid to the Church in Need International, the AVSI foundation, CAFOD, Caritas Internationalis as well as the local Caritas organizations in Austria, France, Germany, Jordan, Lebanon, Luxembourg, the Middle East and North Africa, Syria, and Turkey.

Also present was the Catholic Near East Welfare Association, Catholic Relief Services, the International Catholic Migration Commission, the International Confederation of the Society of Saint Vincent de Paul, the Jesuit Refugee Service, and the Sovereign Military Order of Malta.

Pope Francis thanked the relief organizations in aiding those suffering and called for an end to the violence plaguing the Syrian people.

“The Holy See’s concern for the crisis in Syria, and in a particular way, for the people, often defenseless, who are suffering as a result of it, is well known. Benedict XVI repeatedly called for a ceasefire and for a search for a resolution through dialogue in order to achieve a profound reconciliation between sides. Let the weapons be silent!” the Pope exclaimed.

The Holy Father also recalled the efforts of his predecessor to find a peaceful solution to the violence by sending Cardinal Robert Sarah to the region as well as “manifesting his concrete and fatherly solicitude with a donation.”

“The destiny of the Syrian people,” the Pope continued, “is a concern that is close to my heart also. On Easter Sunday I asked for peace: “above all for dear Syria”, I said, “for its people torn by conflict, and for the many refugees who await help and comfort. How much blood has been shed! And how much suffering must there be before a political solution to the crisis is found”.

Renewing his appeal for peace in the region, and encouraged the intention of the international community to foster a peaceful dialogue with the opposing parties in Syria to bring an end to the war.

The Holy Father also encouraged the charitable organizations working in the region, saying that Church is called in these moments to give a “concrete and sincere witness” to charity.

“May your timely and coordinated work be an expression of the communion to which it gives witness, as the recent Synod on the Church in the Middle East suggested,” the Holy Father said.

Appealing to the international community, Pope Francis asked, apart from negotiating a solution to the conflict, for “the provision of humanitarian aid for the displaced and refugees.”

Concluding his address, the Holy Father expressed his closeness to the Christian communities in Syria and the Middle East, saying that they have the enormous task of offering a “Christian presence” in the region.

“The participation of the entire Christian community to this important work of assistance and aid is imperative at this time,” the Pope said. “And let every one of us, let each of us think of Syria. What great suffering, what great poverty, what great grief experienced by Jesus who suffers, who is poor, who is expelled from his homeland. It is Jesus! This is a mystery, but it is our Christian mystery. Let us contemplate Jesus’ suffering in the inhabitants of beloved Syria.”