Rebel, rebel – how couldn’t they know? 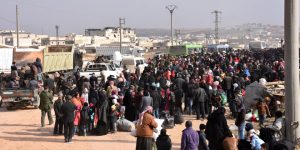 Running scared … after four years of ‘rebel’ control, thousands are pouring out of Aleppo .-pic SANA

SUDDENLY, late in the Syrian day, one mainstream western news outlet is taking baby steps towards honouring the claim in its title.

The Independent’s Robert Fisk has joined colleague, Patrick Cockburn, in calling bullshit on key elements of the propaganda narrative being exported from Syria’s killing fields.

Significantly, Fisk and Cockburn are not newbies cutting their teeth in the Middle East. They are two of the most experienced and widely respected foreign correspondents in the business who, between them, have seen more wars than can be good for anyone.

Unlike many reporters filling our papers and airwaves they do not limit themselves to  re-packaging the latest claims of partisan contacts garnered from social media or international satellite calls. In fact, they have both condemned the practice and the quality of information it delivers.

Fisk and Cockburn are not always right, far from it. But their narratives are sifted through decades of hard-earned subject knowledge.

This week Fisk, in his own inimitable way, skewered the central lie at the heart of the whole western deceit on Syria – rebels in Aleppo are not, he contends, unalloyed good guys who deserve all the love, money and weapons we can shower on them.

“No-one doubts that foreigners are fighting alongside Jabhat al-Nusra/Al-Qaeda and the Salafist Ahrar al-Sham and other groups around the city,” Fisk writes.

“But, oddly, that’s not what we call them. We refer to them as ‘rebels’ – as if they were the Maquis fighting in the French resistance or Partisans freeing Yugoslavia from the Nazis or, indeed, the insurgents of Warsaw struggling for freedom from the German SS.

“Which they clearly are not.”