The Grand Mufti of Syria forgives those who killed his son!

Dr Hassoun is one of the most impressive men I have ever met. Certainly no one has ever made a ‘first impression’ on me like this man did.

I had the privilege of being Dr Hassoun’s guest at the Umayyad Mosque in Damascus in May 2013, and he left me with a lovely gift (a carving of the mosque) that I will treasure till the day I die.

Even so, it was not the trinket that was the real gift, but the man himself. As Fisk’s interview well reflects, he is a man of intelligence, courage, and deep compassion. 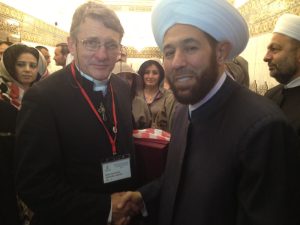 The Grand Mufti of Syria preaches a message of forgiveness

‘I met those men who assassinated my own son – and they told me they didn’t even know whom they were killing.” Sheikh Ahmad Badreddin Hassoun, the Grand Mufti of Syria, sits in a straightbacked chair, his immaculate white turban atop a narrow, intelligent and very troubled face. His son Sania was a second-grade student at Aleppo University when he was shot dead getting into his car. “I went to see the two men in the court and they said they’d just been given the number of the car’s registration plate, that they didn’t know whom they had killed until they went home and watched the news on television.”

I ask for his reaction to the men’s confession, and the Grand Mufti puts his hands over his eyes and weeps. “He was only 21, my youngest son. It was 10 October last year. I am trying to forget that he is dead. In fact I feel as if Saria is still living. On that day, he was to be betrothed to his future wife. She was a student of medicine, he was in the politics and economics department. ‘Saria’ in Arabic means ‘the highest point’. The two men said that in all 15 were involved in planning my son’s death. They said they were told he was a very important man. I said to them: ‘I forgive you’ and I asked the judge to forgive them. But he said they were guilty of 10 times as many crimes and must be judged.”

Sheikh Hassoun holds up a finger. “That same day I received an SMS message. It said: ‘We are not in need of your forgiveness.’ Then I heard on one of the news channels that the gang’s leader had said he would ‘judge the Mufti first. Then let him forgive us.’ So I sent a message: ‘I have never killed any man and I don’t intend to kill any man but I regard myself as a bridge of reconciliation. A Mufti must be a father to all. So what do you want to kill me for?’

“All the men involved were Syrians, from the countryside of Aleppo. They said they received their command from Turkey and Saudi Arabia, that they were each paid 50,000 Syrian pounds. This shows that my son’s killing was not out of doctrine or belief. The two men were 18 or 19 only.”

Sheikh Hassoun is, you might say, government-approved – he prayed beside Bashar al-Assad in a Damascus mosque after a bomb warning – and his family, let alone he himself, was an obvious target for Syria’s rebels. But his courage and his message of reconciliation cannot be faulted. In whatever new Syria arises from the rubble, Sheikh Hussein should be there even if his President has gone.

And he speaks with remarkable frankness. When I tell him that I fear the mukhabarat intelligence service in Syria contaminates all it touches, including the institutions of government, he does not hesitate for a moment before replying.

“I suffered from the mukhabarat. I was taken from my post as a preacher from 1972 until 2000. I was taken from my position as Friday speaker in the Aleppo mosque and from lecturing on four occasions. The intelligence services all over the world are the same: they never look after the interest of the human being – they only look after their own institution. Sometimes the intelligence service can be against the president himself.”

And he asks whether it is not also true that the American intelligence services do not also spy on Americans and all of Europe, a difficult question – it must be said – to deny. “Let us put aside the Prophet Mohamed, Jesus and Moses – all the rest of the world are controlled by intelligence services.”

Unlike most Syrians, the Mufti looks forward rather than back. He prays for a Geneva 2 conference. “I am the Mufti of all Syrians – Sunni Muslims, Christians, Alawites, Druze – of all the diversity of sects we had before the war. There is no choice other than reconciliation; it is the only way back. But to offer reconciliation, we must eliminate the ‘external hand’ first.

“And if the neighbouring countries like Turkey, Iraq, Saudi Arabia and Lebanon don’t try to make this same reconciliation, they will burn – the fire of crisis will flow to them, especially Turkey. For all Syrians, we are open for them to come back. The problem is those who came from outside Syria – especially from Iraq and Turkey – who came without visas over smugglers’ trails either to meet death or to overthrow the authorities here.”

A tougher Mufti emerges now. His sons’ killers, it transpires, are not the only prisoners of the regime that he has met. “I saw men after they were arrested,” he says. “Some were in tears. They said they thought they were on their way to fight in Palestine, not to fight in Syria.”

There are times – when Sheikh Hassoun speaks of an “external hand”, “elimination” and “criminal gangs” – when one hears His Master’s Voice. And on the question of sarin gas, he takes the government’s side of the story. He quotes Bashar al-Assad as saying he would never use gas against Syrians – that if he had used it, the war would not have gone on for two and a half years.

The first major use of gas came in March at Khan al-Assal in Aleppo province, near the Mufti’s residence, when at least 26 civilians suffocated to death. This is his version of what happened.

“Some of the farm labourers reported to me that all the terrorists in the area had suddenly left – the night before the attack – and had evacuated all their people. So the civilians were happy – they were civilians and many were the wives and children of soldiers – and so they went back at last to their homes. Then came the chemical missile attack. I said at that time, in March, that this event is just an experiment, that gas will be used again in other places.”

This, of course, is not a story the Americans want to hear. Five months ago, the Mufti was invited to speak at George Mason and George Washington Universities in the United States and he travelled to Jordan for his visa. He says he was asked to go to the US embassy in Amman where he was interrogated by a woman diplomat from behind a glass screen.

“I was so insulted that I decided not to go and I left for Damascus the next morning.” A wise move. Sheikh Hassoun says that, the same day, one of his sons, who was in Amman, received a call from the embassy denying him a visa. “To be a secular Mufti,” the sheikh adds, “is dangerous.”

And it is true that the Mufti is a most secular man – he was even once an Assembly MP for Aleppo. “I am ready to go anywhere in the world to say that war is not a sacred deed,” he says. “And those who have fought under the name of Jesus, Mohamed or Moses are lying. Prophets come to give life, not death.

“There is a history of building churches and mosques, but let us build human beings. Let us cease the language of killing. Had we paid all the funds of war to make peace, paradise would exist now. This is the message of my Syria.”