The monastery of Mother Agnes of Homs is under attack!

For those who write off Mother Agnes Mariam (pictured below in Beirut between myself and Mairead Maguire) as a pro-regime stooge, it’s worth noting that her monastery has been attacked by government forces. A total of 21 missiles have been fired into it! 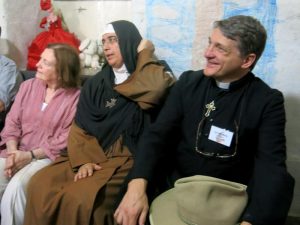 The damage has been extensive, as can be seen from the pics below. Thankfully no one has yet been killed but one of the sisters has been injured. It would appear that the attacks are designed to terrorize the sisters and refugees who take sanctuary in the monastery. One could believe that it was all a mistake if it had happened just once, but the helicopter gunship has made three separate attacks now! 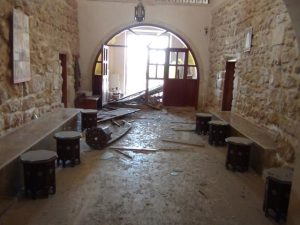 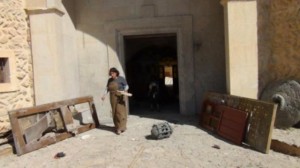 The article pasted below from Vatican News makes clear that the monastery is also in the sights of the rebels!

We pray for the health and safety of all those who shelter in the monastery of ‘St James the Mutilated’ who are already experiencing some of the suffering of their namesake!

Qara – The Belgian Catholic priest Fr. Daniel Maes, 74, of the religious Order of “Canons Regular Premonstratensian”, is in the sights of jihadist groups who intend to eliminate him and invade the monastery of San James mutilated in Qara, 90 km north of Damascus. The monastery, belonging to the Greek-Catholic diocese of Homs, is situated on a border area between warring groups and could be occupied to become a military logistic base of the rebels. After the death of Fr. Francois Murad, the Christian community in Syria is very concerned. Each line of communication with the monastery is interrupted. The alarm was sent to Fides Agency by some Catholic Syrian leaders and by the families of monks living in St. James, who belong to 9 nationalities, even in Europe.

Fr. Maes taught moral theology in Belgium for 20 years and since 2010 resides at the monastery, where he is director of the Seminary. The convent of St. James in Qara is an ancient structure dating back to the fifth century A.D. There is a female monastic community, led by the Palestinian nun, Sister Agnes Mariam de la Croix, enriched over the years by a religious community of men and families of lay Christians, Sunnis and Alawites. In past months, the monastery was at the center of gunfire and was hit and damaged by the bombing of the regular Syrian army helicopters that probably wanted to hit arms depots placed in trenches or ditches near the monastery, used for supplies of water in the Byzantine period.Lately, the monastery houses and assists refugee families, regardless of their religious affiliation. Fr. Daniel maintains close contacts with Syrian groups in France, Belgium and the Netherlands which, through voluntary associations, send humanitarian aid to the displaced.

The priest denounced the “ethnic cleansing” carried out on Christians in Qusair, when the town was taken by the rebels and by jihadist groups. “The surrounding Christian villages were destroyed and all the faithful who were caught were killed, according to a logic of sectarian hatred,” he wrote in recent weeks to Fides Agency. “For decades, Christians and Muslims lived in peace in Syria. If criminal gangs can roam and terrorize civilians, is this not against international laws? Who will protect the innocent and ensure the future of this country? ” Says the priest. Thus Fr. Maes describes the current social situation in Syria: “Young people are disappointed, because foreign powers dictate their agenda. Moderate Muslims are worried, because Salafists and fundamentalists want to impose a totalitarian dictatorship of religious nature. The citizens are terrified because they are innocent victims of armed gangs”. Fr. Maes concludes: “The Syrian regime had long since lost all credibility. Today, the urgency is to allow Syria to survive. The Syrian people themselves must reform the country, according to a process of true democracy: a people who, independently, ensures equal treatment for all”.