The persecution of Christians in Syria continues

Christians are not the only minority group in Syria being persecuted, of course. I was speaking to a friend in Damascus last night and she told me that there had been massacres in seven Alawite villages. She knew personally of 136 people who had been killed because they were Alawites.

Meanwhile the US and NATO move to give further aid to the very persons committing these massacres!  Lord, have mercy on us! 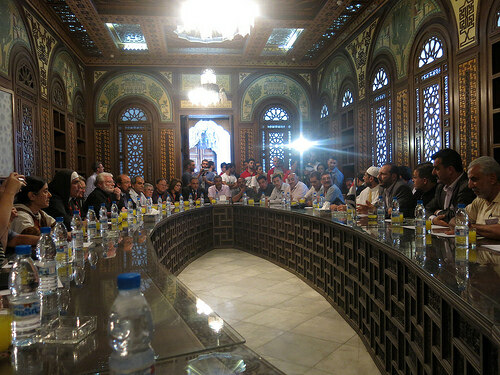 Christians and Muslims working together for peace in Damascus

Towns and villages in Syria that have been home to Christians for hundreds of years are being steadily emptied by sectarian violence and targeted kidnappings.

Tens of thousands Syriac Christians – members of the oldest Christian community in the world – have fled their ancestral provinces of Deir al-Zour and Hasakah in northeastern Syria, residents have said.

“It breaks my heart to think how our long history is being uprooted,” said Ishow Goriye, the head of a Syriac Christian political Hasakah.

Mr Goriye, told The Daily Telegraph how, over the past two years he has watched as Christian families from Hasakah pack their possessions on the rooftops of their vehicles and flee their homes “with little plan to come back”.

Conflict in the area, desperate economic conditions, lawlessness, and persecution by rebel groups born from the perception that Christians support the regime, remain the main reasons for why Christian families are fleeing the area.

“It began as kidnapping for money, but then they started telling me I should worship Allah,” a male Christian resident of Hasakah who was kidnapped by jihadists said.

“I was with five others. We were tied and blindfolded and pushed down on our knees. One of the kidnappers leant so close to my face I could feel his breath. He hissed: ‘Why don’t you become a Muslim? Then you can be free’.”

Another Christian in Hasakah said he knew of “five forced conversions” in recent weeks.

While speaking to The Telegraph, its members were loath to criticise the opposition rebels, but many confessed that the situation had become “too bad” not to talk about it.

One Hasakah resident who has now escaped the area said: “Rebels said we had to pay money for the revolution. My cousin is a farmer, and wanted to check on his land. I warned him he should take armed security but he refused. A group kidnapped him in the barn of his farm. We had to pay $60,000 [£52,000] for his release. They are milking the Christians”.

Though accused by some opposition groups of supporting Mr Assad, much of Syria’s Christian community has avoided “choosing sides” in the war, seeking self-preservation in neutrality.

But the strategy has left Christians defenceless in the face of sectarian attacks and the lawlessness that now define rebel-held areas. Last year, when government forces pulled out Hasakah province, leaving the terrain in the hands of Kurdish groups and Sunni opposition rebel, Christians became an easy target.

A Christian man calling himself Joseph and living in Hasakah said: “The only unprotected group are the Christians. The Arabs had arms coming from Saudi and Qatar, the Kurds had help from Kurdistan. We had no weapons at all.”

Local residents said many Christians had tried to join the rebellion against President Assad, but their efforts were marginalised early on by sectarian minded Sunni rebel groups.

Joseph added: “We are not with the regime. Many times the Islamists didn’t want us to join them in the demonstrations. We tried to participate but we were not given a role. It felt as though it was a strategy to force Christians out of the revolution”.

Bassam Ishak, a Christian member of the main opposition bloc the Syrian National Coalition, who comes from Hasakah, said he and his colleagues had tried “several times” to approach western officials asking for weapons for Christian groups to defend their areas.

“The West wants to arm the seculars or ‘West friendly’ people, well we, the Syriac Christians those people. We want arms to protect our communities,” he said. “We spoke to western diplomats asking for help, and everyone ignored us”.