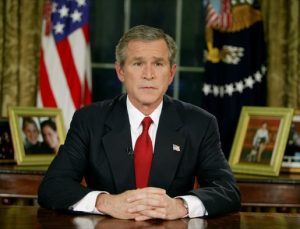 AS liberation battles gather pace in Aleppo and Mosul propagandists continue to muddy the waters.

While the resistance to fundamentalist Islam in Iraq is hailed a fight for freedom by western media outlets, many of those mastheads pour scorn on the same battle across the border in Syria.

And, not just scorn but a relentless barrage of insults, half-truths and straight out lies that coalesce into the type of narrative that led Australian and British leaders to aim two fingers at the United Nations and follow George W Bush into Iraq.

The subsequent war, of course, led to Abu Ghraib, Bush’s notorious “mission accomplished” boast and the loss of hundreds of thousands of Iraqi lives – 654,000 according to an estimate by the British medical jounal Lancet.

Sydney University Professor Tim Anderson says much of the blame for the misinformation surrounding the Syrian situation can be sheeted home to journalists who should, and often do, know better.

Prof Anderson has visited Syria to interview Syrians and examine developments for himself. His third book The Dirty War On Syria is being marketed by Global Research Publishers.

In this article, he warns Australians to be wary about partisan journalists who use partisan sources to amplify the call for another war www.globalresearch.ca/watchdogs-to-attack-dogs-western-liberal-media-failures-on-syria/5516530…