Archbishop of Russia tells Obama to get his hands off Syria!

While the media focuses its attention on tensions between Obama and Putin and the other key political players in the Syrian drama, the role of the church continues to be ignored!

Never before in the history of the world, so far as I can see, has the church universal been so united on a single issue! From the Pope to the heads of the Orthodox and Protestant churches to bishops and clergy everywhere the message to the US President has been unequivocal – get your hands off Syria!

The letter that follows come directly from the head of the Russian Orthodox Church – His Holiness, Patriarch Kirill. 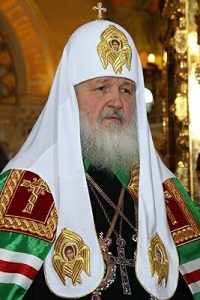 The tragic events in Syria have raised anxiety and caused pain in the Russian Orthodox Church. We receive information about the situation there not from the news reports but from living evidence coming to us from religious figures, ordinary believers and our compatriots living in that country.

Syria today has become an arena of the armed conflict. Engaged in it are foreign mercenaries and militants linked with international terrorist centres. The war has become an everyday golgotha for millions of civilians.

We were deeply alarmed to learn about the plans of the US army to strike the territory of Syria. Undoubtedly, it will bring ever greater sufferings to the Syrian people, first of all, to the civilian population. An external military intervention may result in the radical forces coming to power in Syria who will not be able and will not wish to ensure inter-confessional accord in the Syrian society.

Our special concern is for the fate of the Christian population of Syria, which in that case will come under the threat of total extermination or banishment. It has already happened in the regions of the country seized by militants. An attempt made by the armed groups of the Syrian opposition to seize the town of Ma’loula whose residents are predominantly Christians has become a new confirmation of our concerns. The militants keep shelling the town in which ancient Christian monasteries are located – the sites of special veneration by the faithful all over the world.

The Christian hierarchs of Aleppo, Metropolitans Paul and John Ibrahim, have been held captive by militants since April 22. Nothing is known about their fate despite of the fact that a number of religious figures appealed to the leaders of their states to help to release them.

I am deeply convinced that the countries which belong to the Christian civilization bear a special responsibility for the fate of Christians in the Middle East.

The Russian Orthodox Church knows the price of human sufferings and losses since in the 20th century our people survived two devastating world wars which claimed millions of lives and ruined many people’s lives. We also regard as our own pain the pain and losses the American people suffered in the terrible terrorist attacks on 11 September 2001.

On the eve of the anniversary of that sad date, I appeal to you to lend your ear to the voices of religious leaders who unanimously oppose any military interference in the Syrian conflict and to make every effort for the soonest commencement of peace negotiations.

+KIRILL
PATRIARCH OF MOSCOW AND ALL RUSSIA