Syrian Christian leaders plead with the USA to stop arming the rebels!

Posted on February 5, 2014 by fatherdave

The US policy in Syria is in tatters. Apparently John Kerry admitted as much in a recent closed-door meeting with Senators and said he would prefer giving direct military aid to the so-called ‘moderate rebels’. Meanwhile a team of Syrian Bishops and other church leaders visit the US to plead with the government NOT to arm the rebels!

Whatever the real agenda of Kerry and the USA, the voice of Syrian Christians pleading for peace is not likely to be heard above the war-drums. 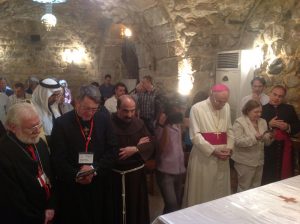 with Syrian church leaders in the home of Ananias in Damascus, praying for peace

The stories told by five top Syrian Christian leaders about the horrors their churches are experiencing at the hands of Islamist extremists are biblical in their brutality.

Bishop Elias Toumeh, representative of the Greek Orthodox Patriarch of Antioch and All the East, tells of the funeral he led ten days ago for the headless body of one of his parishioners in Marmarita. Rev. Adeeb Awad, vice moderator of the National Evangelical Synod of Syria and Lebanon, explains how the rebels blew up his church and then pointed the finger at the regime. Bishop Armash Nalbandian, primate of the Armenian Church of Damascus, says he received word on Facebook from a fellow bishop in Aleppo that two congregants were traveling when opposition fighters stopped their bus, made them present their Armenian IDs, and then took them away. The fighters, Nalbandian recounts, returned to the fellow passengers a few hours later with a box, which they said were cakes. Inside were the two Armenian heads.

The bishops’ stories are difficult to independently verify, and the war’s death toll goes far beyond just Christian communities in Syria–more than 130,000 people have been killed since the fighting began, and at least two million others have fled the country. But they are emerging as part of a concerted push by Syrian Christians to get the U.S. to stop its support for rebel groups fighting Syrian president Bashar al Assad. “The US must change its politics and must choose the way of diplomacy and dialogue, not supporting rebels and calling them freedom fighters,” says Nalbandian.

The group is the first delegation of its kind to visit Washington since the crisis began three years ago, and its five members represent key different Christian communities in the country. Awad, Toumeh, and Nalbandian were joined by Rev. Riad Jarjour, Presbyterian pastor from Homs, and Bishop Dionysius Jean Kawak, Metropolitan of the Syrian Orthodox Church. The Westminster Institute and Barnabas Aid, two groups that focus on religious freedom and relief for threatened faith communities, sponsored their trip.

Given the United States’ increased support for non-terrorist rebel groups in the wake of the Assad regime’s use of chemical weapons, the religious leaders’ mission is a long shot. The bishops are asking the United States to exert pressure on countries like Saudi Arabia, Qatar, and Turkey to stop supporting and sending terrorist fighters to Syria. “The real problem is that the strong military opposition on the ground is a foreign opposition,” Awad explains, arguing that US support of opposition groups means support for foreign terrorist fighters. “They are the ones killing and attacking churches and clergy and nuns and burning houses and eating human livers and hearts and cutting heads,” Awad says.

The Syrian Christian churches are not publicly calling for outright support of the Assad regime. Doing so would further endanger their followers and hurt the moral component of their case, given the regime’s alleged use of chemical weapons against civilians. Instead, they’re meeting privately with law makers, diplomats and think tanks.

read the rest of this story here.