12 Reasons why the US should NOT attack Syria

Posted on September 4, 2013 by fatherdave

This is an excellent and well-argued offering from my friend, Dr Chandra Muzaffar.

Is is any coincidence that church leaders (from the Pope on down) and human-rights activists worldwide are united in their stance opposing US military intervention in Syria?

Certainly the US will expose itself as a ‘rogue state’ if it attacks Syria without support from: 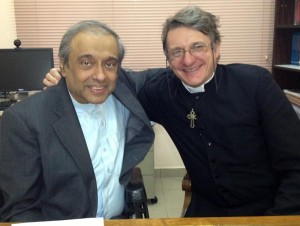 The House of Representatives and the Senate of the United States of America should reject any form of US military intervention in Syria.

Rejection would be a clear statement against war. It would be a lucid message on behalf of peace.

There are at least 12 reasons why the US Congress, and the people of the world, should adopt such a stand.

One, if the two houses represent the voice of the American people, it is significant that 50% of the people are against military intervention in Syria according to a NBC poll conducted on the 28-29 of August 2013. Only 42% support military action. It is also important to bear in mind that the people in countries regarded as the US’s ‘comrades-in-arms’ are also opposed to military force. In France it is 64% of the citizenry. In Britain, the House of Commons, reflecting popular sentiment, has voted against military intervention in Syria.

Two, since the United Nations’ investigation team has just begun its analysis of the alleged chemical attack near Damascus on 21 August, the US Congress should insist that President Obama wait until its findings are made public, before any multilateral — not unilateral—decision under the aegis of the UN is taken on Syria. Though the UN report will not tell us directly who was responsible for the attack, there may be enough circumstantial evidence in it to indicate the likely culprit. Obama’s disdainful attitude towards the UN’s investigation is an affront to the world’s most important international institution. Former US president George Bush junior was also guilty of such disdain when he ignored the UN Security Council (UNSC) in his arrogant march to war in Iraq in 2003.

Three, an attack on Syria would also be a violation of international law since Syria has not attacked the US. Like Bush, Obama has decided to bypass the UNSC. In fact, on a number of occasions in the last three decades, the US has, without going through the UNSC, invaded other sovereign states.

Four, the US Congress should in all fairness accord due  consideration to the facts and arguments advanced by those who insist that Syrian President Bashar al-Assad could not have been responsible for the chemical weapons attack. Why would he want to use such a weapon in the presence of the UN investigation team that he himself had invited to ascertain the truth about earlier chemical gas attacks? More importantly, what does Bashar gain from a chemical attack when he has already scored a series of victories on the battle-ground in recent months?

Five, in contrast to Bashar, the armed opposition in Syria appears to have compelling motives for launching a chemical weapons assault. It would serve to draw the US and its allies into a direct military involvement in Syria especially since Obama had declared repeatedly that the use of chemical weapons by Bashar would be the red line that would provoke a US response. There have been other occasions in the course of the 30 month conflict when the armed rebels have manipulated incidents and events to elicit some reaction or other from Western powers or the UN. Often, incidents linked to heinous mass killings committed by the rebels are blamed upon the Bashar government via a biased global media. The 21 August chemical gas incident has all the markings of a meticulously planned and executed false flag operation.

Six, indeed the US is guilty of fabricating various false flag operations since it emerged as a colonial power at the end of the nineteenth century. From the battleship Maine  incident in Havana in 1898 to the Gulf of Tonkin episode in 1964 to the Kuwait incubator event in 1990 to the Weapons of Mass Destruction (WMD) myth in Iraq in 2003, US intelligence and security outfits have become adept at creating situations and circumstances which are then manipulated to undermine ‘the enemy.’

Seven, the hypocrisy of US political and security elites is not confined to false flag operations. Even when it comes to the use of chemical weapons, it is obvious that what the elites preach often contradicts their actual behaviour. Today, US leaders condemn the use of chemical weapons as morally reprehensible. We ask, who used agent orange in Vietnam which led to the death of thousands? Who supplied through oblique channels mustard gas to Saddam Hussein in his aggression against Iran — gas which he employed in Halabjah in March 1988 killing 5000 defenceless people?  And what about the depleted uranium widely used in Iraq in the wake of the Anglo-American invasion of that land in 2003? To this day, hundreds of babies continue to be born deformed as a result of the impact of DU. US  leaders have no moral authority to pontificate about the obscenity of chemical weapons.

Eight, that the moral fig-leaf is a cover for motives which are related to power and politics is borne out by yet another dimension of the chemical weapons issue. If Obama has chosen to be bellicose on the issue, it is partly because his Administration sees it as an assertion of power against Russia in light of a number of recent developments in which the latter has stood up to the US. Through the Syrian conflict, the US elite aims to show President Vladimir Putin that the US is still the world’s sole military superpower and not to be trifled with.

Nine, the conflict raises yet another question of morality and power. The US and its Western allies, like its regional partners such as Saudi Arabia, Qatar, Turkey and Israel, are funding, arming, providing intelligence and offering logistical assistance to groups totally committed to violence and terror as a method of achieving their goal of ousting the Bashar government. The Jahbat al-Nusra, linked to Al-Qaeda — arguably the strongest of the armed groups ? is a case in point. On the hand, the US and the others proclaim that they are all opposed to violence and terrorism and yet on the other hand they unscrupulously use terror outfits in pursuit of their power.

Ten, the Syrian conflict has also reinforced longstanding sectarian and tribal divisions in West Asia and North Africa (WANA). Actors within and without WANA are exploiting the Sunni-Shia dichotomy in particular as a way of playing the majority sect in Islam against the minority with the aim of weakening Muslim solidarity. Sectarian violence is now rearing its ugly head not just in Syria but also — and for a much longer while — in Lebanon, Bahrain and Iraq.

Eleven, needless to say, sectarian clashes in WANA benefit Israel which views turmoil and upheaval in its neighbourhood as a boon to its  goal of remaining the dominant force in the region. For the Israeli elite, the ability of their nation to perpetuate its dominance is sine qua non for the security of the state which is their primary obsession. It is significant that Israel and Zionism have been able to ensure that US and Western policy as a whole in WANA is dovetailed to meet the core interests of the Israeli state. Taking military action against Syria with the objective of overthrowing Bashar is what Israel wants because Bashar is an important link in the axis of resistance to Israeli dominance which includes Iran and Hezbollah. Israel has conducted three air strikes within Syria in the last six months and its commandos have been training segments of the armed opposition. It is believed that the so-called ‘independent’ intelligence on the 21 August chemical weapons incident that is being hawked around by the US and Britain is actually from Israel. In this regard, it is worth reiterating that Israel is the hidden hand in much of the politics of other states in WANA such as Egypt, Lebanon, Jordan, Iraq and Sudan.

Twelve, by taking military action against WANA states ? partly at the urging of Israel ? the US has brought nothing but misery and suffering to the people. The classic example is of course Iraq. 10 years after its conquest by the US and Britain, Iraq is a totally devastated nation, wrecked by perpetual sectarian violence, first ignited by the invasion itself in 2003. Outside WANA there is the other tragic case of Afghanistan which 12 years after the US-NATO occupation is still mired in the agony of chaos. Why should Syria be any different?  Some advocates of military intervention in Syria are of the opinion that since the military action that Obama is planning is limited in scope and duration, Syria will not end up like Iraq or Afghanistan.  There is no guarantee. Once it commences, the military operation could assume a life of its own. The response from the Syrian military command, and the reaction of Iran and Russia could be decisive. Besides, there are individuals and groups in Obama’s trench who are determined to oust Bashar, to achieve regime change. That could lead to a prolonged campaign.

Instead of travelling further down the military route, the US House of Representatives and the Senate should urge Obama to lend his weight to the proposed US-Russia meeting on Syria to be attended by all the other regional and international actors connected to the Syrian conflict.  Securing an immediate ceasefire would be the meeting’s principal goal. The US and its allies should cease providing military, monetary and all other forms of assistance to the armed opposition on the ground. As the opposition’s benefactors turn off the tap, so should Bashar’s Russian and Iranian backers. The ceasefire should be supervised by the UN and would set the stage for the establishment of an interim national unity government comprising representatives from Bashar’s Baath Party, the legitimate Syrian opposition and independent individuals. The unity government will draft a new constitution which will provide for a parliamentary election to be followed immediately by a presidential election. Both elections, and the referendum on the constitution, should be conducted and monitored by the UN.

These are ideas which have been on the table before but they have not materialised. Both Bashar and his opponents and their respective supporters should prove, through deeds, that this time they will make a determined effort to achieve results. They should realise that the alternative to a peaceful resolution of the conflict through negotiations is a continuous, brutal, bloody civil-cum-proxy war without winners.

Dr. Chandra Muzaffar is President of the International Movement for a   Just World (JUST)