Christians amongst the hardest hit in Syria

The Patriarch is a good man. People accuse him of being pro-government, but it’s impossible now, as a Christian, to side with the rebellion when the anti-Assad forces are completely dominated by Jihadist mercenaries determined to put an end to any Christian presence in the country!

It’s not only the Christians who are being targeted by the Islamic Front and Jabhat Al Nusra, of course. Druze, Alawites, Shia Muslims in general – anyone who doesn’t fit the rigid definition of orthodoxy as laid down by the Jihadist leadership faces possible expulsion or extermination wherever the rebels are victorious!

This is no longer a battle between the Syrian government and Syrians fighting for democratic change (if it ever was). The battle now is between the Syrian people and the foreign powers who want to destroy Syria as a pluralistic society.

I have no doubt that the Syrian people will eventually rally together to expel these foreigners. Even so, the road back towards reconciliation will itself be an enormous battle. So much blood has been spilt! So many good people have died! Surely Syria is going to need good men like the Patriarch and many others like him to aid in the rebuilding of the country. 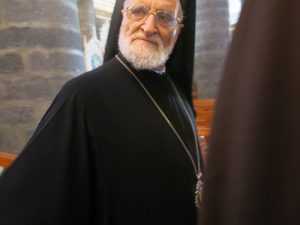 DAMASCUS, Dec. 19 (Xinhua) — Syria’s long-term crisis has displaced more than 450,000 Christian Syrians and killed more than a thousand of them, Gregory III Laham, Patriarch of the Church of Antioch and all East, told Xinhua in an interview on Thursday.

“As we know, there are 120,000 Syrians killed in the 3-year- long crisis, including Syrian Christians. Maybe the Christians among the killed amount to 1,000. There are also nine million people displaced inside and outside Syria, 450,000 of whom were Christians,” Laham said.

The Patriarch’s remarks came as the Syrian crisis is coming to its third year and the sectarian theme of the crisis could no longer hide itself with the strong presence of fighters from al- Qaida-linked Nusra Front and the so-called Islamic State of Iraq and the Levant (ISIL), in several Syrian areas.

Syria’s Christians, who take up about 10 percent in the country ‘s Sunni-majority population, have felt the pain of the protracted crisis, as their population has been subject to attacks by the radical rebels. The latest incident took place earlier this month, when radical jihadists fully controlled Syria’s Christian town of Maaloula, north of the capital Damascus.

The armed radicals have fully controlled the town and started burning houses, the mainstream media said, adding that the rebels have also kidnapped 12 nuns from Mar Thecla Monastery, the largest monastery in that key historic area, which is one of the oldest cradles of Christianity in Syria.

Aside from the Christians, Syrians from the Druze and Alawite minorities, an offshoot of Shiite Islam, have also been subject to harsher treatment by the jihadi groups, whose leaders contended that they are protecting the majority Sunni population from the crackdown of the Syrian administration, whose top ranks belong to the Alawite minority.

In the interview, Laham said “there are 85 churches that have been destroyed, sabotaged, burnt and subject to systematic desecration by the Takfiri groups.”

“The crisis has tragically targeted all the Syrians with all of their sects,” he said.

Regarding the kidnapped nuns of Maloula and the two bishops, who have been kidnapped since eight months ago in northern Aleppo province, the top Patriarch said there was no news about them or the time of their release.

“Targeting high-profile Christian figures is aimed to disseminate fear among the Christians and push people to leave the country,” he remarked.

Yet, with all of the sectarian tension the crisis has generated, Laham said “there is no civil war in Syria.”

“Talks about the inter-fighting among the Syrians are not accurate. There are external parties that have been running the conflict. Those parties are more stronger than any opposition, so the issue is not purely Syrian but a war against Syria from the outside,” he noted.

While blaming the conflict on foreign power, the Patriarch called for the Europeans and Arab countries to find a political solution to the crisis, saying “as part of our Christian role, we call for unity among the Arab nation because the bases of our success is to have a support from unity. Also, we call for a political European unity to find a solution and to push the Arab countries to respect and accept the solution for the Syrian crisis. So if an Arab-European consensus could be reached, it would press the opposition to unite and to go with the government to Geneva II peace conference.”

Syrians’ hopes are now pinned on the upcoming Geneva II conference aimed to start the political process and give a chance for recovering of the sinking economy. The conference, slated on January 22, is aimed at engaging warring Syrian parties to negotiate an end to the prolonged crisis.

Syria’s Christians have showed support to the embattled President Bashar al-Assad whose administration has boasted itself as a defender of the minority groups in Syria, which consists of a remarkable melange of sects and beliefs.

Christians in Syria are quite well off and some even hold senior positions in the government. This might be one of the causes that have raised their concern over a possible government change.