Declassified documents expose US support for ISIS and nobody cares!

The Western narrative used to justify the destruction of Syria looks increasingly brittle and self-contradictory as it evolves with time. This latest batch of declassified documents expose US hypocrisy on two important issues:

Firstly, contrary to all official US pronouncements, it is beyond dispute now that the US government knew (at least from early 2012) that ‘moderate’ secular rebels were not the major force working against the Assad government. On the contrary, the US had been knowingly siding with Islamic extremists from the very beginning!

Secondly, the rise of ISIS did not come as a shock to the US and take them by surprise. On the contrary, US intelligence services had predicted exactly what was going to happen some years before the storm broke. This did not affect US policy, with arms and money pouring in to support the rebel cause, even though US intelligence knew that this would all contribute to the ISIS nightmare.

Perhaps the most shocking thing of all though is that nobody seems to care about these revelations! Certainly nobody in power is apologising, and the mainline media in the US is focusing on what is surely a side-issue in the declassified documents, related to the 2012 attack on the US Consulate in Benghazi. Meanwhile the Neo-cons are busy rolling out a new spin – claiming that the entire jihadist catastrophe is due to the President’s failure to give proper support to the ‘moderate Syrian rebels’ when he could have, even though it should be obvious to everyone now that these ‘moderates’ never existed!

I don’t know what this says about our world. I suppose for most Americans and for most Australians this nightmare is on the other side of the world and so we don’t get too worked up about it. Eventually though the chickens come home to roost. 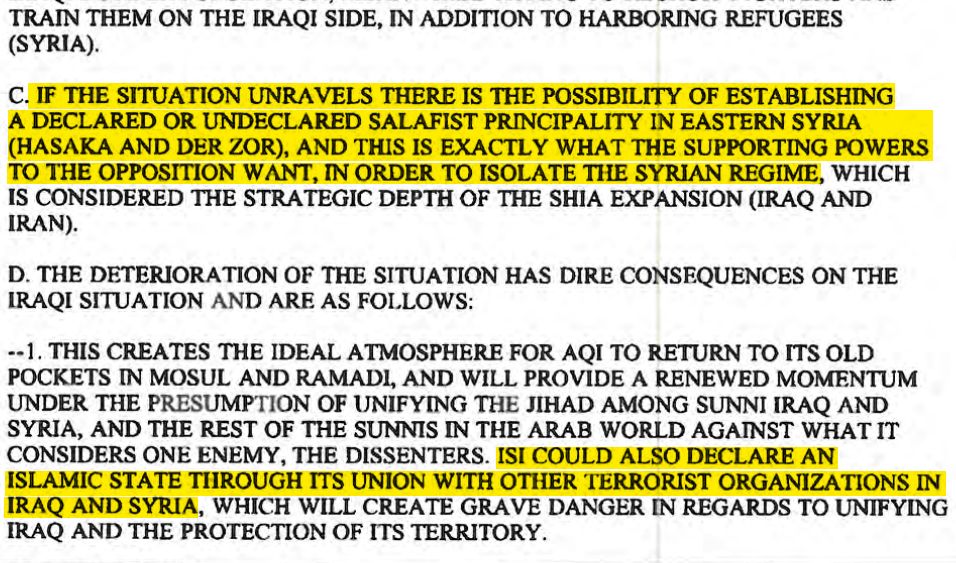 ISIS’ declaration of an Islamic State was fully anticipated two years before it happened.

an excerpt from The Jacobin

How the US Helped ISIS by David Mizner

A recently declassified US military intelligence document is further evidence of US complicity. Formerly classified as “secret,” an August 2012 Defense Intelligence Agency report was among a batch of documents obtained by the conservative group Judicial Watch.

The mainstream press and Republican politicians have focused on other documents in the collection: those related to the 2012 attack on the US Consulate in Benghazi, Libya. Largely overlooked is this document, which contradicts the official narrative not just about the rise of ISIS but also the makeup of the opposition in Syria and its relationship with foreign backers.

“The August 5, 2012 DIA report confirms much of what Assad has been saying all along about his opponents both inside and outside Syria,” says “terrorism analyst” Max Abrams.

The report concerns a period in time when the escalating violence in Iraq had ceased to be a prominent topic in the US press and when its coverage of the war in Syria — mirroring the discussion in Washington — focused on the Assad government, not the forces aligned against it. This may be hard to imagine now that ISIS has become the US government’s favorite monster, but during these months President Obama and his team gave major speeches on Syria that didn’t even mention the group.

Even after ISIS took Fallujah in January 2014, discussion of the group in establishment outlets was scarce. It wasn’t until later in 2014 — after continued battlefield victories and heavily publicized beheadings of westerners — that Islamic State became Public Enemy Number 1.

American officials claimed the ascendancy of ISIS had caught American intelligence by surprise. Yet in the 2012 report — which was circulated widely through the US government — the DIA foresaw the creation of a “Salafist principality” in eastern Syria. It also said that Islamic State of Iraq could “return to its old pockets in Mosul and Ramadi” and declare an “Islamic state” in western Iraq and eastern Syria.

More than that, the report says the creation of an Islamic state was precisely the goal of the foreign governments that support the opposition:

If the situation unravels there is the possibility of establishing a declared or undeclared Salafist principality in Eastern Syria (Hasaka and Der Zor) and this is exactly what the supporting powers to the opposition want, in order to isolate the Syrian regime, which is considered the strategic depth of the Shia expansion (Iraq and Iran).

More broadly, the United States participated in a war against the Syrian government that turned Islamic State of Iraq into a regional power encompassing — and devastating — large parts of two countries. Such an outcome was predictable — and indeed predicted by the US government itself.

While American politicians and pundits have blamed the ascendance of ISIS on former Iraqi president Nouri al-Maliki and Assad — or on the removal of American troops from Iraq — the DIA report reminds us that the key event in the rise of ISIS was the corresponding rise of the insurgency in Syria. Brad Hoff of the Levant Report, the first journalist to analyze the DIA report, says it shows that “A nascent Islamic State became a reality only with the rise of the Syrian insurgency . . . there is no mention of U.S. troop withdrawal from Iraq as a catalyst.”

Maliki warned that the war in Syria could engulf Iraq, yet the United States and its allies kept supporting the insurgency. The American bombing of ISIS, relatively light and sporadic, has only intensified the belief of many Iraqis that the United States doesn’t want to defeat the group.

The decision of the US to train its own force was an acknowledgement that it’d been unable to find moderate groups to support. Former US Ambassador Robert Ford has admitted as much, saying that “for a long time, we have looked the other way” as US-backed groups worked with al-Qaeda’s affiliate, the Islamic State of Iraq spinoff al-Nusra Front. Many “moderate” rebels — “entire CIA-backed rebel units” — have joined al-Nusra Front and ISIS. Earlier this year, the main US-backed group, Harakat al-Hazm, couldn’t beat al-Nusra Front — so it joined them.

The 2012 DIA document confirms that reactionaries dominated the opposition from early on. “The Salafist, The Muslim Brotherhood, and AQI are the major forces driving the insurgency in Syria,” it says. It also notes that “AQI supported the Syrian opposition from the beginning.”

This is the long-obscured truth that the DIA report underscores: that after the initial stage of the war in Syria, simply to support the war on the Syrian government was to help ISIS.

2 Responses to Declassified documents expose US support for ISIS and nobody cares!