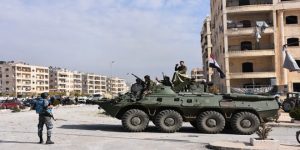 “We are not asking you to make war for us, but only to end the unjust claims of your allies that want to impose antiquated laws – unbearable for the people of the 21st Century” – Archbishop Jean Clement Jeanbart

ALEPPO’S Catholic Archbishop is urging the west to drop its support for jihadi fighters and to, instead, back Syrians battling to free their second city.

Monsignor Jean-Clement Jeanbart has called on France and other western nations to turn their backs on fundamentalist rebels that have descended on Syria from around the globe.

“The hardest thing for Christians still present in Aleppo is the prospect of having to live, morning and evening with this insecurity – the destabilising, disconcerting uncertainty,” he wrote in Italian.

“Imagining that one day a Muslim fundamentalist state would be imposed on them – for them this is an unbearable nightmare.

“This is why we turn to our brothers in France and throughout the west, and we beg you to help us ensure that this does not happen.

“We are not asking you to make war for us, but only to end the unjust claims of your allies that want to impose antiquated laws – laws unbearable for the people of the twenty-first century who want to be free to choose their culture, lifestyle and, finally, their faith.”

Mgr Jeanbart was appointed Archbishop of the Melkite Greek Catholic Church in 1968.

However, he wrote, it wasn’t just the 18,000 baptised followers of his church in Aleppo who had been traumatised by the jihadi offensive.

“For five years now the terrorists here have been calling the shots,” he said.

“They have sewn terror everywhere, killed tens of thousands of innocent people, destroyed thousands of factories, businesses and institutions of public services, looted houses and stolen, without any concern, assets of the country and its citizens.

”They have made victims of many innocent people, kidnapping and brutally murdering countless people, including nuns, priests and even bishops.”

In his call for a complete re-think of the western position on Syria, published by Global Research on October 29, Mgr Jeanbart said, Syrians had placed their faith in the grace of God “to arouse the consciences of the great decision-makers”.

Moving down a step or two in the pecking order, he wished UN envoy Staffan de Mistura success in any effort he could make towards reviving a peace process that would lead to “long-awaited dialogue between Syrians”.

Over the weekend, Britain’s Guardian newspaper reported, rebels had killed 41 people in the 10-days of the aerial ceasefire and were advancing on suburban Hamadaniyeh.