Surely this is the beginning of the end for the Syrian ‘rebel alliance’. The Al-Nusra Front has brazenly murdered an FSA commander and the FSA has responded by threatening open war against Al-Nusra. Is it even sensible to refer to this as an ‘alliance’ any more?

Meanwhile the U.S. and Britain are still promising more arms to the rebels. This, of course, is all in the name of ‘democracy’. The irony is that NATO’s own figures show that only 10% of the Syrian population still support the rebels!

Indeed it is a dark and despicable game that is being played by the ‘great’ powers while the poor people of Syria continue to pay the price. 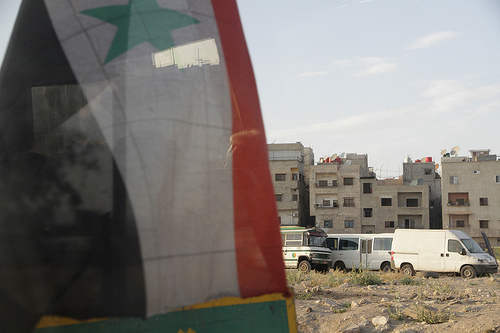 A key commander of the U.S.-backed Free Syrian Army was killed recently by Syria’s al Qaeda rebels, a sign the opposition to the Bashar al-Assad regime is fracturing and Islamist rebels are on the rise.

Kamal Hamami, the FSA commander, was killed as he went to a meeting of al Qaeda-backed rebels to discuss joint operations against the Syrian army, a U.S. official said, confirming Middle East press reports.

Hamami had opposed the al Qaeda-linked rebels and said there was no place for them within the opposition forces.

He was killed in Latakia province, in the northern part of the country near the Turkish border, a known stronghold of Islamist rebels.

The assassination triggered a call by the FSA for a declaration of war against al Qaeda rebel groups, including the two major groups, the al-Nusra Front and the Islamic State of Iraq and Levant.

“The Nusra Front and the AQI-sponsored Islamic State of Iraq and the Levant (ISIL) seem to have different ideas about working with the mainstream opposition and this could lead to growing problems within the extremist landscape,” said the U.S. official.

“More attacks by Islamic extremists against mainstream opposition figures could lead to retaliation by others in the extremist universe who have been focusing the fight on Assad’s regime,” the official added.

“This decision paves the way for al Qaeda to control opposition fighters,” Idris told the Daily Telegraph. “The West promises and promises. This is a joke now. … What are our friends in the West waiting for? For Iran and Hezbollah to kill all the Syrian people?”

Syria’s Islamist rebels are committed to creating a post-Assad state that adheres to extremist Sharia law tenets. The killing of the Hamami is the first indicator that the Islamist rebels will not cooperate with FSA rebels in seeking the ouster of the Assad regime.

The split further complicates Syria’s civil war that has claimed more than 93,000 lives.

Until recently, the rebels had been advancing on the capital city, Damascus. However, military and other support from Russia and Iran has forced the rebels further from the city.

Residents in the northern Syrian province of Al-Raqqah held a protest Wednesday against the al-Nusra Front that has controlled the area since the spring. The protesters said the group was no different than the Assad regime.

Nearby, al-Nusra jihadists fought against Kurdish Popular Protection Units in Ra’s al-Ayn, on the Turkish border.

The Washington Free Beacon first reported July 2 that thousands of foreign terrorists joined Islamist rebel groups in Syria over the past several months.

Most of the groups are fighting for the al-Nusra Front, and in some cases, entire brigades are being formed of jihadists from foreign countries.

While numbers are difficult to estimate, U.S. officials say Islamist opposition rebels number between 6,000 and 10,000 fighters.

The Free Syrian Army, which includes former Syrian military forces, is said to number as many as 80,000 rebels.

However, some of the FSA rebels have switched and sided with the Islamists in recent months.

The Obama administration announced recently that it would begin providing arms and other lethal support to secular rebels. Turkey, Saudi Arabia, and several Persian Gulf states also are arming both camps of rebels.

The Assad regime is backed by Russia, Iran, and the Lebanese Hezbollah terrorist organization.

Meanwhile, U.S. officials also identified a new foreign fighter group in Syria called Jaysh al-Muhajirin wal-Ansar, Arabic for the Army of Foreign Fighters and Local Supporters. The group is made up of foreign jihadists and is coordinating its operations with the al Qaeda Islamic State of Iraq and Levant.

The terrorist group has been active near Aleppo in northern Syria and appears to be using several different names. It is made up of terrorists from several nations, including some in Europe, Chechnya, Turkey, and Syria.

Another foreign group also has been identified as Katibat al-Muhajirin fi Bilad al-Sham, or Al-Muhajirin Brigade in the Levant, which is made up of Libyans and has carried out attacks in northwestern Syria and the Latakia region.

“We will not let them get away with it because they want to target us,” a senior FSA commander was quoted by Reuters. “We are going to wipe the floor with them.”

The assassination followed a dispute between Hamami’s forces and the al Qaeda-linked rebel group over control of a strategic checkpoint in Latakia, Reuters reported.

While Hamami’s forces previously fought together with the Islamists, the FSA has sought to separate itself from Islamist rebels to put off western concerns that any arms supplied to the FSA would reach al Qaeda.

According to Reuters, FSA political coordinator Louay Mekdad said Abu Ayman al-Baghdadi, the Islamic State’s Emir of the coastal region, personally shot Hamami and his brother at the roadblock.

Additionally, Mekdad said one of Hamami’s fighters was allowed to return to the FSA in order to relay the terrorists’ message that the FSA is now viewed as “heretics,” and that the FSA Supreme Command will now become a target of al Qaeda.

The Hamami assassination appeared similar to al Qaeda’s assassination on Sept. 9, 2001, of Afghan rebel leader Ahmad Shah Massoud, a revered figure who was killed by terrorists posing as news reporters two days before the al Qaeda attacks on the United States.

Massoud led the Northern Alliance in Afghanistan whose forces were opposing the Islamist Taliban that was backing al Qaeda. The Taliban were ousted in October 2001, but Taliban insurgents are continuing to wage jihad against U.S. forces and Afghan government troops.