At last Geneva II is underway – not in ideal circumstances and not with everybody in attendance, but underway nonetheless.

Most reports on the conference thus far have been stressing the anger and acrimony being displayed by speakers. This is entirely to be expected. Did we really think that persons who have watched more than 100,000 of their friends, family and fellow-countrymen die would politely sit down and sip tea with one another? Even so, they are talking. This was a lot to expect and it lays the ground for hope.

I have been involved in enough domestic disputes to know that if you can get the antagonists to sit in the same room without engaging in physical violence you’ve achieved a great deal. From that point there is a potential path to peace even if the room is filled with tension and the initial speeches are full of angry accusations.

This is not to say that the meeting has been organised for the sake of mediation. The absence of Iran testifies to the real agenda of the organisers. To continue the domestic analogy, it is as if the mediator has allowed one party to bring all their family and friends with them as support persons while insisting that the other party come alone. The power players from the West are not looking for mediation. They have an agenda as to who is going to win this settlement and the meeting has been constructed accordingly.

The reasons Iran was excluded was, of course, because they refused to sign off on a statement saying that Bashar Al-Assad would be excluded from any future Syrian government. This was the precondition laid down by the United States. It was simply outrageous!

Who the hell does John Kerry think he is to tell the Syrians who they are allowed to have as their President? It is not up to Kerry or Obama or any other outsider to decide who will be the future President of Syria! It is up to the Syrian people!

Iran was right to refuse to sign anything that took the future of Syria out of the hands of Syrians. Iran has its own agenda too, of course, and I’m not suggesting that it acted from noble motives. Even so, Iran has once again taken the moral high ground from the West and its allies who are increasingly resembling the very ‘axis of evil’ that they once projected on to their enemies!

And so the U.S. agenda for Geneva II has been laid bare. The U.S. could not achieve regime change through the death of 110,000 people. Perhaps they’ll achieve it through diplomatic channels?

Does this mean there is no hope for Geneva II? Not at all! Whether for good reason or for bad, the U.S. and its allies have brought the warring parties of Syria together. Anything can happen from this point. We pray that by the grace of God the control of the process might escape the hands of the U.S. and all the foreign power-players who want their piece of this once beautiful land. Perhaps by the grace of God there will be a space created within this meeting where Syrian can talk to Syrian and plan for a future together. 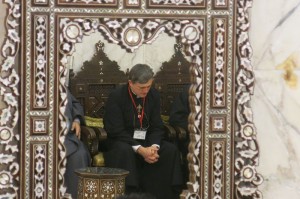 1 Response to Geneva II – the U.S. agenda is laid bare!