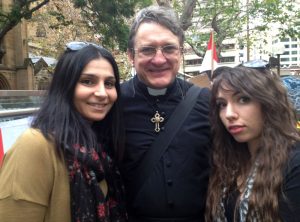 Our hearts bleed for the people of Syria.

What we see on the TV are images of Syria as a battle zone, where courageous rebels try to liberate their country from the despotic rule of Bashar Al-Assad while government lackeys hammer them in return. This is not the real Syria, and these people are not the heart of Syria. So many of these people are not even Syrian!

The people of Syria are beautiful people. They are a proud and noble people, and they are a people who believe that they are capable of sorting out their own issue through dialogue rather than through violence, and they deserve better than what they are getting from the international community!

I know that in America there seems to be a deep-seated belief that the way to solve violence is to introduce more violence! That seems to be fundamental to their gun culture – a belief that the way to reduce gun-deaths is to increase the number of guns available – and maybe that’s a large part of what is going on here? Personally, I suspect more sinister forces are at work but, either way, we in this country are a bit smarter than that, I think. We recognise that the way to reduce violence is not to add more weapons and soldiers to the conflagration. It is nonsensical and it is evil.

There has been enough fighting in Syria. There are already way too many weapons in Syria, and we need to pray and to lift up our voices and plead with our governments to stop sending ‘lethal aid’ into Syria. The people of Syria are a proud people and a noble people and they are capable of working their issues through by means of dialogue if the foreign powers will get their grubby hands off their country!

This was the speech  given by Father Dave at the “Hands Off Syria” rally, held at the Sydney Town Hall on June 15, 2013.