The relationship between Palestine and Syria is a complex one, and no one understands that better than my insightful friend, Franklin Lamb.

Palestinian refugees in Syria receive equal rights to Syrian citizens – a privilege denied them everywhere else in the Middle East – and so you might expect Palestinian leaders to be strong supporters of the Syrian government. And yet Khaled Mashal (leader of Hamas) moved his headquarters from Damascus to Doha and was, at one point, sending Hamas soldiers into Syria to fight alongside the rebels!

Mashal was probably acting under orders from senior figures in the Muslim Brotherhood. Certainly his wavering allegiances should not be taken as indicative of the broader position  of Palestinians, let alone of Palestinian refugees in Syria who seem, for the most part, to prefer the secular rule of Bashar Al-Assad to the religious tyranny of the Jihadists! 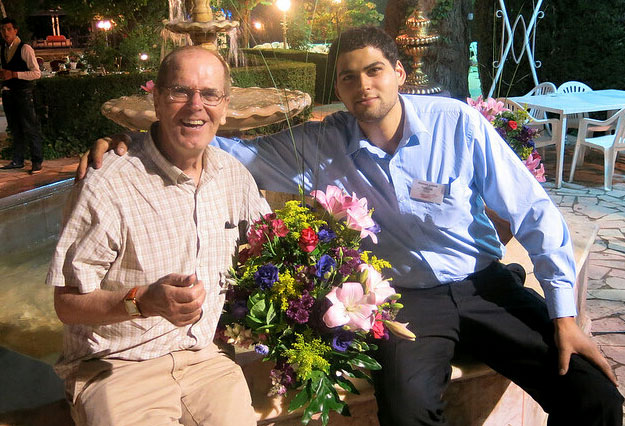 Vows of ‘Occupation Until Martyrdom’

Jihadists are entering Syria at an accelerating pace, according to Syrian, UNWRA, and Palestinian officials as well as residents in the refugee camps here. For the now-estimated 7000 imported foreign fighters, Palestinian camps are seen as optimal locales for setting up bases across Syria.

The Syrian people compassionately host 10 official, UN-mandated Palestinian camps, along with three unofficial ones, whose populations total at least 230,000. Eight of these are “Nakba (“catastrophe”) camps,” organized soon after Palestinians were expelled from their homes in 1948, while two, Qabr Essit and Dera’a (emergency camp), are “Naksa (“day of setback”) camps.” The latter were set up in 1967 as a result of the internationally condemned Zionist-colonial aggression against the two sister-Arab-nationalist regions—Palestine’s West Bank and Syria’s Golan Heights.

And it was on the Ides of March of the year 2011 we saw an explosion of violence near one of these camps, the Dera’a camp established in 1950, in the south near the Jordanian border.

But first, perhaps a simple listing of the camps, along with their populations and dates of establishment, would be in order here:

As of 8/8/13, seven of the camps—two in the north and five in the Damascus area and in the south of Syria—are presently with their throats under the jackboot of foreign Salafi-Jihadists. These jihadist cells moved against the camps early in the current crisis for purposes of forced recruitment, to benefit from a supply of noncombatant human shields, to shakedown the residents and take over UNWRA facilities, and to make use of the erstwhile “refugee camp security zones.” All these steps were precursory to the setting up of military bases from which to launch operations aimed at toppling the current government of the Syrian Arab Republic.

How do the jihadists infiltrate the camps?

How is it possible that more than half of the Palestinian camps in Syria not only fell, but did so, regrettably, without all that much resistance, to the point at which we see them now—dominated by largely foreign jihadists who continue to impose their unwanted extremist religious beliefs on a largely progressive secular Palestinian community? It is a subject currently much discussed here.

This observer has deduced from a number of conversations—with former and current camp residents, as well as members of the Democratic Front for the Liberation of Palestine, the Popular Front for the Liberation of Palestine, and the Popular Front for the Liberation of Palestine-General Command, Palestinian NGO’s, and also with academics—that there is a ‘model of occupation’ metastasizing in Syria in a manner strikingly similar to what we saw six years ago at Nahr al Bared Palestinian camp near Tripoli Lebanon. The stories we hear today are quite similar to those from among the nearly 30,000 refugees at Nahr al Bared who were forced to flee to the nearby Badawi camp or to Lebanon’s ten other camps—reports related to this observer in visits to Nahr al Bared in May of 2007.

What we hear today in Syria bears an almost uncanny likeness. For instance one lady, whose family is from Safad in occupied Palestine explained: “First they (the intruders) appeared only a few in number. We noticed them and that some had ‘foreign’ accents and wore conservative clothes, most had beards. They were polite and friendly. Then more arrived, a few followed by women and children. They stayed to themselves at first and they began using the local mosque—even being welcomed at first by local sheiks who sometimes expressed admiration for the sincerity and devoutness. Then some of them began to preach their versions of the Koran, and at some point their gentle teaching became more strident, and soon these men were commenting on how some of the Palestinian women dressed in an un-Islamic fashion and even lectured young women about modesty and that they must change their ways, including stop smoking, and to leave public meetings if they were the only women present, and wear a full hijab.”

The lady’s sister interrupted: “Then guns appeared and some of the men appeared to be very skilled when they would use, for example, a school or playground to train. They were so serious and seemed to be in a trance of some kind. There was no possibility to talk or reason with them. All they seemed to want was martyrdom! Some actually believe that Syria was Palestine and they were here to liberate Al Quds!”

Upon some in the camps it began to dawn that the newcomers intended imposing their ideas, and that they fully intended that camp residents should submit to “pure Islam,” as they view it. Some resistance began to jell from camp residents, but the camp popular committees did not have the power to confront them, and a few actually joined them. The fighting with Syrian government troops accelerated the takeover process, and soon the camp residents were presented with a demand: join the gunmen and “liberate” the camps.

With respect to Ahmad Jibril’s Popular Front for the Liberation of Palestine-General Command—and no offense meant to them and their officials, with whom this observer met in July and early August—but several of their best Palestinian patriot commanders jumped ship in protest against the plan to “liberate” Yarmouk. At the same time many of the PFLP-GC rank-and-file fighters split and joined the opposition for various reasons, including better pay and wanting to be on the presumed winning side. That being said, however, camp residents overwhelmingly rejected the PFLP-GC “defense” project, and insisted that their camp was neutral, that it was to be maintained as a safe zone for its residents, who were guests in Syria pending their return to still-occupied Palestine.

Again, this chain of events is singularly similar to what we saw (too late as it turned out) in Lebanon’s Nahr al Bared, a process which, like the one unfolding now in Syria, was accelerated by the civil war raging here.

There is fear that the Syrian army will sooner or later attack and destroy the camps in order to confront the rebel militias—similar to what the Lebanese army did during the 75 days of shelling in 2007. At that time it took vengeance on the camp and demolished it in an unjustifiable frenzy of shelling for the criminal attack and killing of some Lebanese troops, an attack that had been carried out by camp invaders, not Palestinians. For Palestinians in Syria, it is the all too familiar fate of outsiders entering and seeking to control their camps, coupled with the threat of a host army attacking them to confront the invaders. The residents are once more killed or forced to flee and their homes are destroyed.

Here once more comes to mind the cliché: “Where is the Arab League, the Organization of Islamic Council, the EU or the UN? Where’s Waldo?

In order to gain control of the camps in Syria, two main processes appear to be made use of by the al Qaeda affiliates. One is what this observer labels the ‘Nahr al Bared model”. A Popular Committee member from Yarmouk, who just barely escaped the camp before his home was destroyed by a direct hit mortar round, put it this way:

But the camps quickly become petri dishes, and the explosive growth of the foreign implantations is sometimes dazzling. By the time government supporters report the camp invaders it’s too late. And what can the government do anyhow? Guns appear everywhere, and suddenly it’s no longer ‘nicely nicely’ polite treatment from the Islamic brothers. Residents are told they must help liberate the camp from the Assad regime or face the wrath of Allah. Consequently, fleeing for one’s life becomes an utmost urgency, often literally as the snipers arrive and intense fighting, and rooftop targeting, ensues.

So what happens next to the Palestinian camps in Syria? Is a hopeful, positive or peaceful resolution possible? This observer’s 2-cents worth of analysis suggests that the answer is no. The camps will stay largely under the domination, militarily and socially, of the jihadist elements that continue building fortifications and ‘digging in.’ What is happening is a God-awful calamity, one being foisted upon those whose only prayers and wishes are to leave Syria and return home to reclaim their stolen lands.

A central question is the precarious situation in Yarmouk and the fate of the 18-20 percent of its population still remaining. These are people risking their lives daily trying to avoid snipers from both sides. One can hear speculation on the prospects that the Syrian Army, aided by Hezbollah, will move on Yarmouk to try and expel the rebel militia. Some PLO officials with offices inside the Yarmouk neighborhood claim that Ahmad Jibril’s PFLP-GC is being beefed up and armed by the government with more than just AK47’s and RPG’s. Last winter, some of Jibril’s forces were expelled when they tried to eject the foreign militia, while others, as mentioned above, went over to the opposite side. At the same time, three PFLP-GC commanders quit over tactics while questioning Jibril’s decision to violate the camp’s neutrality, a decision leading to the destruction of parts of Yarmouk.

As to speculation on the possibility of the Syrian government and/or Hezbollah moving to eject the foreign forces from Yarmouk, this observer does not give the reports much credit. The Syrian Army has more urgent and prioritized battles being waged today, with others being planned. Hezbollah, likewise, is facing challenges at present, and fighting in Yarmouk against unknown numbers of rebel militia would surely add to them. Moreover, any force invading a Palestinian camp faces being roundly condemned over violations of the Cairo agreement forbidding host governments from entering UNRWA refugee camps.
This observer and contacts in the Palestinian community cannot verify the recent report for a foreign media source that al Nusra has fled Yarmouk and is on the run. On the run from whom? Currently they are not being seriously challenged. On the contrary, the al-Qeada affiliates are busy digging more tunnels under the camps to store weapons and move freely. Their ranks are growing not dwindling.

Grim as it sounds, they who reside in Syria’s camps, along with the 12 million Palestinian refugees worldwide, will continue to be at the mercy of events they had no part in creating. It is a fate they share at this moment with much of the rest of Syria’s population, and things are not likely to improve in the immediate term.

But on a more positive note, the Palestinians of Syria persist in their resistance and opposition to the illegal occupation of their country. Theirs is a determination to return to their homeland that simply will not fade or wither, and speaking with Palestinian refugees these past several days in Damascus and Homs has convinced this observer more than ever that on this they will not retreat a single inch—and that in time they will liberate their country.