What’s really going on in Yarmouk? 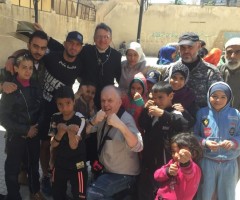 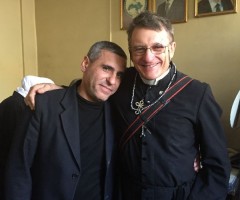 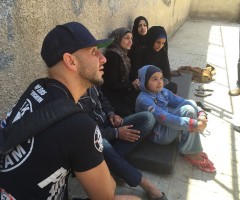 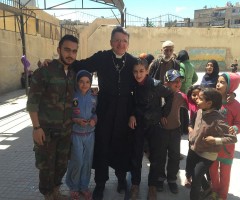 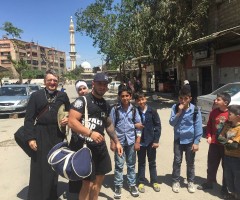 I thought it might prove difficult to get to Yarmouk. My God, it’s hard enough to get into Syria at the moment!

At first I thought we weren’t even going to make it out of Sydney! As soon as the airport authorities saw the word ‘Syria’ on our exit visas we were handed over to the counter-terrorism unit! Even so, we eventually got out of the country, made it smoothly through Beirut airport and then to the Syrian border by taxi, where we found, to our delight, that our visas had been approved. A short drive further and we were at the beautiful Dama Rose hotel, and you wouldn’t know that you were at the centre of a nation-wide war (except for the 40 or so checkpoints that we had to pass through to get there).

I announced our intention to get to Yarmouk right away to the people I thought might be able arrange something, and various phone calls were made. Even so, it wasn’t till we met with the Minister for Tourism the next day (a man whose portfolio sadly leaves him with time on his hands) that the right connections were made and plans were put in place.

Yarmouk is only a few kilometres south of Damascus. It was once a thriving centre of colour and life with a vibrant market that made it much more than just a Palestinian enclave. Over the last four years though it has been the centre of so much violence and death that it is now the most festering wound on the ailing Syrian body. And perhaps the most tragic dimension of Yarmouk at the moment is the way the suffering of these people is being manipulated to provide a new rationale for Western military intervention.

The dominant narrative at the moment is that ISIS, by lodging themselves in Yarmouk, are on the doorstep of the Presidential palace, threatening to take over Damascus! The Assad government, in response, is throwing everything it has at Yarmouk (including its notorious ‘barrel bombs’), killing rebels and civilians alike, in a desperate attempt to stave off the inevitable. The only hope for the poor people of Yarmouk (so the narrative goes) is to send in the Marines!

Of course the Marines don’t have a great track record when it comes to solving other peoples’ problems, especially in the Middle-East (think Afghanistan, Iraq, Libya, …). Even so, if the people of Yarmouk are suffering at the hands of a reckless government in its death throes, can we really expect our benign super-powers to sit on their hands?

My thought was that I needed to get to Yarmouk to see for myself what was going on, and we got there.

We got to within about 300 meters of the border anyway, where the Syrian military made sure we stopped. We could see the front line from where we were but, as our guides pointed out, this meant that ISIS snipers could see us too, and so we soon moved off from the main entrance road and entered a school on the government controlled side of the border where a number of Yarmouk residents were being housed as well as schooled.

We spent our first few hours there teaching the children to box. I appreciate that most people would see that as a crazy thing to do but the kids certainly enjoyed themselves. There was lots of laughter and cheering as young and old put on the gloves and learnt how to throw punches against the pads without hurting their hands (which is not as easy as some think).

After we’d exhausted ourselves playing we sat down with the Principal of the school and some of the elders of the camp and talked, while enjoying the obligatory coffee that always accompanies such meetings.

From our day at Yarmouk, and through subsequent discussions with local Palestinians and with others in Damascus who knew what they were talking about, I came to some pretty firm conclusions about the situation in Yarmouk and, as I expected, the truth is pretty much the reverse of what we’re being told.

The Syrian Arab Army are not the chief villains in this drama. On the contrary, the Yarmouk residents that we met were being housed and fed by that army, and the children that we saw treated the army men like benign uncles. Indeed, when one of the officers who was with us put on the gloves and started throwing punches, all the children started cheering for him!

This is what I’d expected to find, as I’d spent time in a similar encampment for displaced persons from Yarmouk almost exactly 12 months earlier. There again we’d met hundreds of children, all of whom had been relocated to safe places by the army, and we’d taught them to box.

So let’s be clear on a few points:

This is not to say that every Palestinian loves the Syrian army or the Assad government. Indeed, one Palestinian man I spoke to swore that the army had deliberately shelled ISIS in such a way as to force them into Yarmouk! “Why would they do that?” I asked? “In order to bring ISIS into contact with their other great enemy, Hamas, so that they would destroy each other”.

Whether or not that guy was right, his analysis highlights the absurdity of the other side of the media narrative. ISIS are not threatening the Presidential palace from Yarmouk. On the contrary, whether by design or by good fortune, the Syrian army is probably quite pleased to have ISIS in Yarmouk.

There are apparently only around 2000 ISIS militants in Yarmouk in total, and even with superior weapons (being channeled in from Qatar) it seems that they can still be contained by the Palestinian factions opposing them, let alone the Syrian army who have been containing rebels within Yarmouk for a number of years now. The residents have paid a terrible price for that, but the strategy has certainly been effective in protecting the capital.

And so the big lie needs to be turned on its head. The people of Yarmouk are not suffering at the hands of the Syrian army. They are suffering, but the Syrian Arab Army is probably the best friend they have at the moment.

And the army is not about to be overrun by ISIS troops streaming out of Yarmouk. That’s not to say that the army isn’t in trouble. Indeed, they have real problems to deal with in Aleppo and Idlib, but Yarmouk is a relatively minor headache.

2 Responses to What’s really going on in Yarmouk?