Saudis incriminate themselves as the architects of the Ghouta gas attacks

As the dust settles after the West’s failed attempt to destroy Damascus on behalf of the rebels in supposed retribution for the Syrian government’s gas attack on the people of Ghouta, there is a growing body of evidence pointing to the real culprits that is going entirely unnoticed by the mainstream media.

On August 29th an investigative report was published in Mint Press News that suggested that Saudi Prince Bandar Bin Sultan may have been behind the gas attacks that were going to be used by the US as a pretext for an attack on Damascus. The report was unique, not so much because it pointed the finger at the Saudis but because it was the only article in print that was based on interviews with members of the families of those who had been killed in the attack!

Since the publication of the article, the authors,  Dale Gavlak and Yahya Ababneh, have apparently been subjected to threats and intimidation, and Gavlak made a series of attempts to distance herself from the article. Our thanks go to Phil Greaves who has helped piece together the full sordid story as to how the Saudis have attempted to repress and discredit Gavlak and Ababneh’s article. It is hard not to to interpret their efforts as a tacit admission of Saudi guilt! 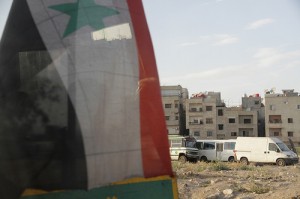 Following AP reporter Dale Gavlak’s attempt to disassociate from the Mint Press News report: “Syrians In Ghouta Claim Saudi-Supplied Rebels Behind Chemical Attack”  (see previous article for background here) Mint Press Editor in Chief Mnar Muhawesh published a statement in response reiterating her support for, and the credentials of, the two journalists involved, along with the substance of the report they had produced. The report in question included statements from residents and relatives of rebel fighters in Eastern Ghouta, who alleged that Saudi Intelligence Chief, Prince Bandar Bin Sultan, had supplied extremist elements in the  region with chemical weapons.

The Muhawesh statement went largely unnoticed in mainstream media, instead, the usual actors produced a variety of baseless lurid smears and conspiracy theories directed at Mint Press and Yahya Ababneh, the reporter on the ground in Ghouta, in transparent efforts to discredit them and the substance of the report.

One particularly vulgar conspiracy crafted by the BuzzFeed “journalist” Rosie Gray – reminiscent of crass attempts to play on orientalist stereotypes of “Iranian deception” abundant in civilised US media and diplomacy-speak – attempted to portray the Mint Press as bias fabricators, on the grounds of the Editors father-in-law being a Shi’a Muslim. In effect casting him and Mint Press as Iranian stooges intent on subverting the western-promoted falsehood that the Assad government ordered the alleged chemical attacks.

In recent weeks, corporate media has largely gone quiet on the whole affair. With the Russian-brokered deal to destroy Syria’s chemical weapons stockpiles thwarting a determined effort by US hawks,  Likudniks, and Gulf monarchs to escalate the Syrian war; the push for overt US intervention has subsided, and along with it the incessant parroting of fantasy narratives and dubious “evidence” attempting to blame the Assad government for the alleged chemical attacks on August 21st.

Muhawesh, fearing for the safety of Dale Gavlak and Yahya Ababneh, has remained silent on the issue since the release of the aforementioned communication, but has now released a full statement outlining a timeline of events surrounding the report, which is reprinted in its entirety below, I urge all to read in full:

I wanted to personally express my appreciation for your continued support and readership following our newsroom’s August 29, 2013 exclusive report titled: “Syrians in Ghouta Claim Saudi-Supplied Rebels Behind Chemical Attack.”

I’ve been silent until today out of concern for the safety of the journalists, Dale Gavlak and Yahya Ababneh, while we worked to bring clarity to their findings and ensuing events.  I’m relieved to now be able to share happenings of the past 60 days as Human Rights Watch addresses ongoing threats to co-author Yahya by Jordanian and Saudi actors in Amman, Jordan.

To be clear, my MintPress colleagues and I continue to stand by Dale and Yahya and their reporting. The tragic incident in Ghouta on August 21—and the Syria conflict as a whole—is complex and, as the article stated, some information could not be independently verified.  While efforts to discredit the story and our organization have disappointed us, we have been most concerned by the tremendous pressure placed on Dale by the Associated Press and more serious threats faced by Yahya.

Since the article was published, I’ve been in almost daily contact with co-author Yahya in Amman, Jordan.  He has related ongoing threats of imprisonment by the Jordanian police for his travel to Syria if he were to continue to report on this story or grant further press interviews.  Yahya has also described increasing pressure from Saudi actors to retract his story and the specific allegation by Ghouta residents of a rebel link to Prince Bandar.

In line with Dale’s description of Yahya as “a reputable journalist” to the New York Times, she distanced herself from the article only after stating in emails to MintPress that the Associated Press demanded her name be removed from the byline nearly two days after the article published.  She has not informed MintPress of the AP’s reason for this request—nor why they and National Public Radio (NPR), subsequently, suspended her.  For background on the situation, here is the timeline of events:

We deeply sympathize with Dale and Yahya as they continue to endure pressures from interests seeking to silence their reporting.  Their courage, and that of many reporters before them, has emboldened MintPress to expose these threats to investigative journalism and has served to strengthen our commitment to in-depth reporting on social justice and human rights issues.

As an independent journalism startup that found itself embroiled in an international crisis, we’re grateful for the advice and assistance provided by experts at The Poynter Institute and Knight Foundation as well as International Federation of Journalists and Human Rights Watch.

Again, I appreciate your support and truly value your readership.  I welcome any questions about the report, ensuing events and our ongoing coverage of the Syrian conflict.

It becomes immediately clear from the above statement that the fantastical conspiracies posited by BuzzFeeds’ Rosie Gray and former Guardian Editor Brian Whitaker, to name but two, were clearly based on nothing more than wild speculation in a vain and somewhat organised attempt to discredit the report; it is no coincidence Gavlaks’ disassociation statement was initially handed to Brian Whitakers eager protegé “Brown Moses”, aka Eliot Higgins, to promote right alongside his lead effort in touting dubious “evidence” pointing the finger at the Syrian army as responsible for Ghouta, much of which has now been thoroughly debunked.

The immediate questions then remain: why so much effort from establishment media players to discredit and smear? Why are elements of Jordanian and Saudi security services threatening Yahya Ababneh and his family, and attempting to force him to retract the statements he gathered in Ghouta if they are merely falsehood, or baseless planted rumour? And why did the AP and NPR suspend Gavlak even though she made (futile) attempts to disassociate from the report to save her career and her colleagues safety?

The logical answer is that those reflected negatively in Yahya Ababneh and Dale Gavlaks’ Ghouta report have something to hide, and are going to great lengths to keep it hidden.