Mother Agnes stirs up controversy across the US and UK

Our dear Mother Agnes has been the subject of constant controversy over the course of her North American tour, and her opponents have been doing their best to scuttle her British speaking engagements before they even take place!

The accusations have been flying thick and fast:

Of course the accusations never have any evidence to back them up and some of the statements attributed to her are entirely fanciful. Even so, some of the mud always sticks and this has resulted in Mother having to withdraw from the ‘Stop the War’ conference in London, scheduled to begin on November 30.

A handful of analysts have put the pieces together – citing the vested interests that are threatened every time the dominant narrative is questioned. Even so, it is disillusioning to see high-profile leftists like Jeremy Scahill and Owen Jones joining the anti-Agnes chorus for reasons that appear to be economic rather than ideological.

I am thankful that journalists like Jonathon Cook and Neil Clark have helped untangle the Mother Agnes controversy. 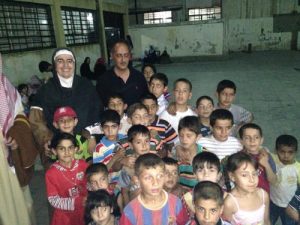 Mother Agnes with orphans in Damascus

Mother Agnes and the ‘liberal’ hawks out to silence her

Just when you thought the ‘liberal interventionists’ and neo-cons couldn’t stoop any lower, they just have.

The ‘pro-free speech’ but actually very anti-free speech bullies have got a new target. A 61-year old nun called Mother Agnes-Mariam who has been living in Syria for twenty years and who runs a campaign called Mussahala (Reconciliation).

For  the West‘s ‘liberal hawks’ and serial interventionists, this elderly lady, who is working tirelessly for peace and an end to the bloodshed in Syria, has become Public Enemy Number One.

Mother Agnes has been subject to a vicious internet campaign of character assassination, smears and defamation. We’ve been told that she is an ‘Assad apologist,’ ‘Assad‘s favourite nun’– she has even been called ‘the Syrian equivalent of one of Hitler’s brown priests’.

When the liberal hawks and serial warmongers saw that Mother Agnes had been invited to speak at the forthcoming international conference of Stop the War, they had a collective hissy fit.

An ’Assad apologist’ speaking to a large audience in Britain?! Why, in the name of ‘free speech‘ and‘democracy‘ it must not be allowed! We must Stop the Nun! Two ‘A List’ speakers at the Stop the War event – Owen Jones and Jeremy Scahill – were urged by Mother Agnes’ enemies via Twitter not to share a platform with the nun. ‘Dear Owen/Jeremy, do you know who you’re sharing a platform with?’style tweets were sent. The two were sent links to articles attacking Mother Agnes.

Jones and Scahill unfortunately bowed to the pressure, and said that they would withdraw from the conference if Mother Agnes was also on the platform. At the weekend Stop the War announced that Mother Agnes had withdrawn from the conference. Her dignified, graceful letter to Stop the War was in sharp contrast to the nastiness of the attacks made on her by her accusers.

Why were the liberal hawks and supporters of the Syrian ‘revolution’ so frightened of an elderly nun addressing a Stop the War conference? If she really was a ‘crackpot’ – another claim made against her – then surely that would have been obvious to those listening to her? Lots of lurid claims have been made against Mother Agnes, someone even claimed on Twitter on Tuesday that she worked ‘with Assad intelligence’, but evidence to back up the claims is decidedly thin on the ground.

The reason she has been attacked – and why it was so important to stop her speaking at the Stop the War event- is because her first-hand account of what has actually been happening in Syria challenges the dominant western narrative.

This dominant narrative says that all the deaths in Syria are the responsibility of the Evil Dictator Bashar al-Assad, a crazed Hitleresque tyrant who since 2011 has been massacring his own people and has even used chemical weapons against them. The dominant narrative says that the Syrian conflict is a clear case of Good vs. Evil, the anti-Assad rebels are Good, Assad and his government are Evil.

Mother Agnes’ testimony challenges this dominant narrative- which is why for the liberal hawks, she is so dangerous.

She has revealed how the ’Good Guys’, who we ’plebs’ in the West are supposed to be cheering on, have been guilty of mass murder.

“Everyone in Syria is facing grave danger. There was a case of Muslim religious leaders being kidnapped and beheaded. They were humiliated and tortured. Ismailis, the Druze, Christians – people from all parts of Syrian society – are being mass murdered. I would like to say that if these butchers didn’t have international support, no one would have dared to cross the line. But today, unfortunately, the violation of human rights and genocide in Syria is covered up on the international level,” Mother Agnes told RT in September.

In the same interview she also questioned the dominant narrative which said that the Syrian government was responsible for the chemical weapons attack at Ghouta in August.

It’s not hard to understand why liberal hawks and the serial interventionists didn’t want Mother Agnes’ to address a well-attended event in London.

The appalling atrocities committed by the rebels- which include the regular terrorist bombing of civilian targets and beheadings, need to be played down, otherwise the ‘plebs’ will be asking: why are our governments in the west siding with such people? In the same way, the dominant narrative regarding the Ghouta attack – i.e. that it was carried out by Assad- must, under no circumstances, be questioned- even if no conclusive evidence has yet been produced to prove that the Syrian government was indeed responsible.

Mother Agnes’ testimony reveals that the so-called ‘War on Terror’ is a sham – that in Syria, the western countries and their regional allies, Saudi Arabia and Israel, are on the same side as the extremist Islamic terror groups that we are told are our greatest enemies.

In my RT OpEdge column last week I discussed how the label ‘conspiracy theorist’ was used by elite gatekeepers to silence dissent and narrow the parameters of debate. In the case of Syria, the preferred technique is to label anyone who challenges the dominant narrative as ‘pro-Assad’, or an ‘Assad apologist‘.

It doesn’t matter if the person/individuals concerned have come out publicly and said that they don’t support President Assad- the charge will still be made against those who dare to question the official line.

The media monitoring group Media Lens @MediaLens for instance have made it clear that they oppose all violence in Syria, whoever is behind it, but that still doesn’t stop them being smeared as‘pro-Assad’ by ‘liberal’ hawks for their exposure of media bias on Syria.

The aim of this ’pro-Assad’ labelling is to marginalise those who dispute the dominant narrative. Someone labelled as ’pro-Assad’ is deemed, by elite gatekeepers, to be ‘outside civilised debate’, but of course there is no such exclusion order served on those who support or defend rebels who bomb innocent civilians, behead people and who persecute Christians and religious minorities.

In Britain and America- countries which like to boast of their commitment to free speech and free expression, it is considered beyond the pale for any public figure to say that they support/defend a secular government which defends Christians and other religious minorities and which is fighting Al Qaeda and other extremist terrorist groups, and which, very probably, enjoys support of the majority of people in Syria. However, it is deemed perfectly acceptable for public figures to say that they are on the same side as ‘rebels’ who put bombs in crowded public areas, behead people and murder religious minorities, or to call for military action to help these ‘rebels’ topple the Syrian government.

Terrified of being branded ‘pro-Assad’, public figures in the west who oppose military strikes on Syria, feel obliged to stress just how ’barbaric’ the Assad government is and they support Assad standing trial for war crimes at The Hague. And of course, they must agree not to share platforms with people like Mother Agnes. They have to bow down very low indeed before the ‘liberal’ hawks and elite gatekeepers, if they’re permitted to have their say on Syria and escape the usual smears, vilifications and defamation.

The campaign against Mother Agnes and the elite gatekeeping on Syria shows us how much free speech and free expression is under threat in Britain today from those who are determined to narrow the parameters of debate and to dictate who should and who should not be allowed a microphone. Expressing his disappointment that Mother Agnes would not be speaking at the Stop the War conference,  Twitter user Orlando Hill said that he would like to have heard a ‘wide spectrum of opinions’ on Syria on 30th November.  But the very last thing liberal hawks, neo-cons and supporters of the Syrian ‘revolution’ want is for people to hear a ‘wide spectrum of opinions’. The dominant narrative must not be questioned. Or else.