It is impossible to know for sure whether this particular account is genuine but indeed it reflects reality on the ground in Syria today. Indeed there may have been many who joined the FSA for the sake of a better Syria but the entire rebellion now has indeed been hijacked by foreigners with their own jihadist agenda.

I suspect it will not be long now before the Syrian rebels unite with the government army to eject the foreigners from their soil. We can only hope and pray that this leads to a period of reconciliation between all Syrians. Sadly, there has been so much violence and pain that the desire for revenge and rough justice will be difficult to overcome. Strong and compassionate leadership from religious as well as political leaders will be crucial if Syria is to be whole again. 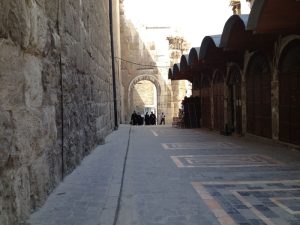 The streets of Damascus

ANTAKYA, Turkey — The activist threw himself into Syria’s revolution from its early days. He organized protests, documented the deadly crackdowns and disseminated the news, risking his life. When the opposition took up arms, he worked closely with rebel groups, helping to spread their message of resistance and taking toll of the war’s carnage in places journalists couldn’t reach. He has won widespread recognition for his work, and he remains deeply involved in the struggle today — though he no longer calls it a revolution. In fact, he thinks it needs to end.

The activist works under his real name, but he requested anonymity to give the candid assessment of the conflict laid out in these remarks, which are compiled from a recent in-depth interview. Asked to speak on the record, he deliberated with friends and colleagues and ultimately declined. He says he fears a backlash: His words could be used to undermine his work, or he could be misunderstood. He also cites safety concerns. But he believes that his message, unpopular among his revolutionary colleagues, is one they need to hear — that their revolution has ended; that a dangerous wave of Islamic extremism has welled up in its place; that they should work to stop the fighting now; and that if they can’t, they should hope it’s Syrian President Bashar al-Assad who wins.

“To simply say I want Assad to win would be a disaster if anyone heard it,” the activist says. “But we’ve created a monster. For too long on the ground, there was too much focus on the crimes the regime was committing and not enough on our own problems. And addressing these problems was always being delayed.

“To that extent, we’ve created ISIS [the Islamic State in Iraq and Syria, a powerful al-Qaeda affiliate that is gaining ground in the rebellion]. And we’ve created Jabhat al-Nusra [another Qaeda-linked group].”

“So yes, if I’m going to choose which side I wish would win at this stage, I would choose the side that’s already in power rather than seeing the extremist side jump into power and destroy everyone else. The extremist groups do not seek a revolution in Syria — or at least, not a democratic one. They seek an Islamic one. And it’s something that’s not accepted by the majority of the country, whether you support Assad or you don’t. I would prefer that Assad wins at a stage like this for one reason: all of the other alternatives are totally unacceptable.

“I would not cheer the idea of Assad winning. I would not help in any way,” the activist says, adding that he’d keep up his fight against the government. “But I will accept it.

“I have no guarantees to offer in government-controlled areas that if those areas are ‘liberated,’ we can keep you safe. That it will not be ISIS and Jabhat al-Nusra in charge, and that you won’t live under their laws. If I could make that guarantee, then I would support the idea of bringing down the regime without a political solution.”

The Islamic extremists threatening to overtake the rebellion, the activist says, pose more of a threat than Assad. “There is no language between civil society and Islamic authority in Syria right now,” he says. “There’s no dialogue. It’s unacceptable.

“In the same way that if you say anything about Assad you’re doomed, if you say anything about God, you’re also doomed. It’s the same way of reacting, but the Islamic system is a much more lethal system, because it depends on an ideology that says, ‘God, who is the creator of the universe, says that we’re in charge. And if you stand against that, then you stand against the creator of the universe. And we will chop your heads off, chop your hands off. We will whip you. We will prevent you from speaking out.’ I think the ability of this Islamic authority and these extremist groups to abuse the citizens of Syria is much higher than that of the Syrian regime.

“A lot of people would argue that, if the regime wins, there would be no space whatsoever for another revolution, because the regime would come back 10 times stronger. The majority of people say that. I think that’s total nonsense.”

The activist says that the moderate opposition is much more capable of resisting Assad than it was before the revolution, when political life was stifled and activists worked in the shadows, often unknown even to each other. “What we have in Syria now is local councils,” the activist says, referring to the civilian administrative groups that have sprouted up in rebel-held territory across the country, “and political and activist groups, whereas before March 2011 we had nothing. It was just a few people that were anonymous online.

“I think it’s definitely possible to see a revolution in the future. But if we don’t accept that we have lost now—that our revolution has stopped, or been put on pause, and that is a big dispute among activists—then that means that everything that’s happening now, and all the crimes that are being committed by Jabhat al-Nusra and ISIS, will be written in history as part of the Syrian revolution. Do you see what I mean? If we can differentiate between this period that was the Syrian revolution, and this period now that is a messy situation that came as a result of a dictator standing against a revolution, then I think we can keep our revolution clean and our aspirations clean and our ideals in place. But if we keep going down this line, then we will turn our revolution into an Islamic revolution, and I think this will be known in history as the Islamic revolution in Syria.

“I’m not going to be able to say things like this publicly—because it would be misunderstood and misinterpreted, in a very messy situation in Syria where now it’s easy for you to be accused of being an agent for the West or an agent for the government. It’s very easy for people to point fingers and accuse you of working against the Syrian revolution. I worry about being misinterpreted or misunderstood and not being able to remain a player on Syria. I’m involved, and I have some sort of effect. I want to continue to be able to do that.

“It’s really about being responsible and saying, ‘OK, 100,000 people have been killed. Do we want another 100,000 to be killed?’ Maybe another 100,000 would be killed anyway. But do we want them to die for the exact reason that we were stubborn? And that’s the question.”