Syria – every story has two sides

“Silver Water: Syria Self-Portrait” is a movie that recently debuted at the Cannes film festival in Paris – the only Arab film in the fest’s official selection.

The movie documents human-rights abuses allegedly carried out by Syrian government forces in the city of Homs. Lilly Martin – an American who has been living in Syria for more than 20 years – raises serious questions about both the movie and the way it is being received! Martin lives in Latakia – only two hours drive from Homs.

Martin doesn’t deny that government forces didn’t commit the atrocities highlighted in the movie. What she does contest though is that those fighting the Syrian government are any less guilty of similar crimes! Martin speaks with first-hand knowledge of rebel atrocities, but points out too that the Internet is rife with examples of crimes committed by FSA fighters, let alone the various takfiri forces!

Martin contests that a movie that only tells half the story is a propaganda movie! It may be entertaining and artistic, but if its effect is to move viewers towards wholesale support of the rebel forces in Syria then it needs to be recognised for what it is – a piece of propaganda. 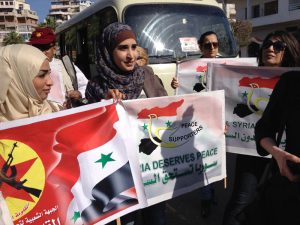 peace activists greet us in Latakia

Where is the other half of this film? A critical look at the film reviews of “Silvered Water: Syria Self-Portrait”

A film about the war in Syria has been shown at the Cannes Film Festival. It was received with a standing ovation for the woman who shot the film in Homs, and the director who developed the film in Paris. Ossama Mohammed and Wiam Simav Bedirxan teamed up to produce a film about the war in Syria, shot in Homs by Wiam. Ossama had left Syria and was living in Paris, when Wiam contacted him from Homs, and the project began after their discussion of her videos of Homs.

Ossama Mohammed said he believed the Syrian regime wanted to destroy the story of each individual that opposed them and that his film could give them a voice. Ossama Muhammed is a well-known critic of Syrian President Bashar al Assad. He used his expertise in film to present his own personal attack on the Syrian regime. His work is not art, but it is pure political propaganda.

Film has been used as war propaganda many times. Johnny Rico wrote on the subject of war movies as propaganda, “Top War Films Used as Political Propaganda“.

“Sometimes it’s to give visual presence to an unknown story of war, or to simply viscerally entertain. But other times, it’s to push a political agenda and sway perspectives. Pushing propaganda is one of the cardinal violations of my rules for war films. In short, this film floods the viewer with all of these troubling narratives and horrific descriptions in the hopes of striking a strong emotional cord, without any accompanying explanation or nuance.”

I live in Syria. I have never left Syria. I have buried my friends and neighbors from 2011 to 2014. My own home in Latakia has been attacked; my summer cottage has been occupied and destroyed in Kassab. My neighbors in Ballouta and Kassab have been massacred and made homeless. My neighbors have been kidnapped and are still held and tortured. I am supporting a refugee family from Aleppo.

You will not see any of my personal experience in Syria told in this film. You will not see any of my neighbor’s experiences in Syria in this film. The film “Silvered Water: Syria Self-Portrait” is missing the other half of the film, in order to be a complete and whole picture about the Syrian war. This film shows you one side only. It shows a brutal regime, with a brutal military who torture, rape, maim and kill innocent civilians.

Where are the equal numbers of civilians tortured, raped, maimed and killed by the rebels, and their Al Qaeda affiliates? There are two deadly sides fighting in Syria, two killing machines in Syria. But, this film shows a two-sided war from one side only. For every war crime and atrocity committed by the Syrian government and the military, I can show and document an equal number of war crimes and atrocities by the rebels and their associates the Radical Islamic terrorists.

The innocent film audience will be moved, swayed and emotionally affected. They will come away from the film with a feeling of hatred and disgust at such a regime or military that could treat human beings in Syria with such viciousness. However, those innocent viewers do not understand the full picture. They have been handed half a film and told to make up their minds.

When will we see the other half of this film? When will all the Syrian people’s suffering be viewed equally? Why should some Syrian’s suffering be more important to watch than others? The director Ossama Mohammed found his perfect partner in the camera of Wiam Simav Bedirxan. Both partners had one political view and their combined efforts have produced a one-sided war-propaganda film about Syria, shot in Homs.

If anyone wants to re-construct the other half of this film, all they have to do is go towww.YouTube.com… and watch the hundreds of beheadings, eating of raw dead flesh and other war crimes committed, videoed and uploaded by the Free Syrian Army and their Radical Islamic affiliates. There are countless websites documenting the war crimes of the Free Syrian Army, and anyone can go through those documents by using www.google.com…. You can look for news articles and videos on Jibhat al Nusra, Islamic Front, Al Qaeda and Islamic State of Iraq and Syria. These are all the rebel fighting groups in Syria that are fighting the Syrian regime. The war crimes and atrocities are documented and videoed on the internet.

I will just give you just two examples of what the rebels have done to my own neighbors. On the night of August 13, 2013, in the village of Ballouta, they entered the homes of sleeping civilians. There was no Syrian regime or Syrian Army presence in the village whatsoever. This was a purely civilian rural location near the border with Turkey, and near Latakia. The terrorists went from house to house killing whole families. Men, women and children were slaughtered. There were no bombs, no cross fire, no battle. The rebels, who are opposed to the regime of President Assad, cut the pregnant belly open of one woman and hung the fetus in the trees by the umbilical cord. There were survivors, who ran and hid in the forests and were eventually taken to shelter at a school in Latakia, where their stories began to be told as eye witnesses to a massacre and war crime. Some survived the massacre, but were kidnapped. These kidnapped people numbered about 100 and were composed of a few adult females, some teenagers, and the rest were very small children. Recently, in Latakia about half of those kidnapped were released in a deal worked out that also included rebels in Homs. The kidnap victims who were released told of being kept nine months in Selma, under the ground, without light. They told of torture and suffering, including the eyes of one small child being gouged out by the rebels and one small boy being shot through the head for no reason except for the pleasure of killing. Still, there are about 50 kidnap victims being held by this same rebel group, who claim they are fighting the regime of Bashar al Assad. How do kidnapping, killing, and torture of small children fit into the heroic freedom-fighter image?

Another part of the film you will never see in “Silvered Water: Syria Self-Portrait” is how in the dead of winter in Aleppo, with heavy snow on the ground, rebels attacked and entered a private mental hospital in Aleppo. Ibn Khaldoun Hospital was attacked in January 2013. They killed and abused some of the staff and patients. They kidnapped one mental patient who is personally known to me. The kidnappers called his father and demanded a ransom to free him. The ransom amount was agreed upon. Then the phone calls stopped. The family feared the worse. Finally, one day a man called and said they had rescued the patient and taken him to another hospital in Aleppo. Because the rebels had thrown him into the snow, he had frost bite on his feet which required the partial amputation of his foot. His crime: being mentally ill and in a private hospital with no connection to the regime or government of any kind.

I am a human-rights activist. I care about people who are suffering inside Syria regardless of their political opinions. I hate the abuse and torture of any person in Syria, regardless of who is the abuser. I also hate the one-sided depiction of the war in Syria. By showing one side only you are helping the conflict to continue without resolve. Showing one side is feeding the flames of war, torture and death. Film: as a tool of torture and a weapon of war. We all lived in Syria in peace and respect of our neighbor’s rights before and it can be done again. The Syrian people are fully capable of resolving political differences among themselves without international intervention or interference. The propaganda-war film, “Silvered Waters: Syria Self-Portrait,” is an attack on the suffering Syrian people from the south shore of France.