Community leaders take the initiative in bringing peace to Syria!

This is what we saw happening in Damascus when we were there in April 2013 – local community groups organising ceasefires between government and rebel troops.

Despite the fact that the politicians and power-players haven’t agreed upon any ceasefire as yet, this hasn’t stopped local community leaders from taking the initiative and reaching agreements with their neighbours! This is a true sign of hope for Syria!

This has certainly been the focus of the ‘Mussalaha’ (reconciliation) group with which I continue to be involved. Below is a picture of some of the figures of a local Mussalaha initiative – priests, sheikhs and other community leaders working together for the sake of their people.

Despite the horrors of war, the humanity of the Syrian people cannot be repressed! 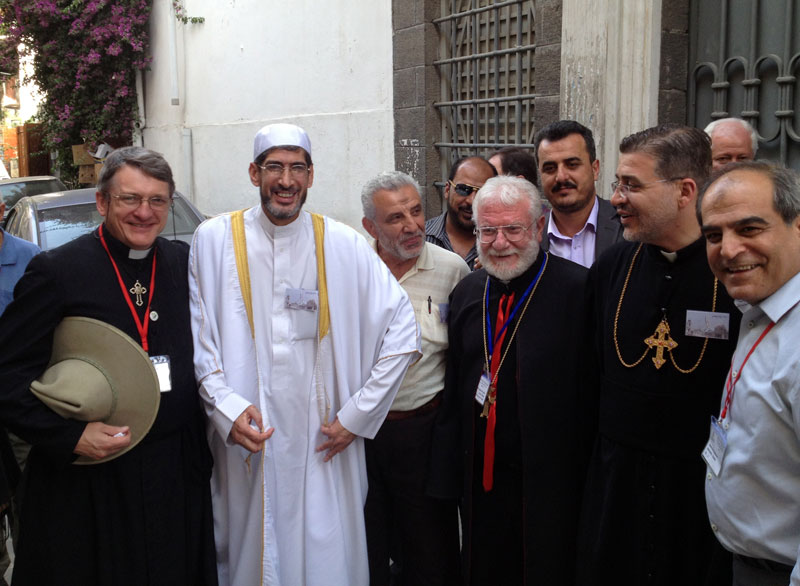 local community leaders in Damascus, working together for peace

Syria’s army and rebels agreed a truce in the capital’s southern suburb of Babbila Monday, the latest in a series of local ceasefires in Damascus flashpoints, an AFP reporter said.

The truces come more than a year into fierce daily battles in and around several areas of the city that have led to rebels and President Bashar al-Assad’s forces deciding to compromise, with neither side able to claim victory.

The accords are negotiated by public personalities from disputed areas, including businessmen and former ministers.

They involve a ceasefire, a siege being lifted and food allowed to enter rebel-held areas, with opposition fighters handing over heavy weapons and the regime raising its red, white, black and green flag there.

A new agreement is reported to be in the offing for Harasta, a rebel bastion northeast of Damascus, and talks over Daraya southwest of the capital are also taking place.

An AFP journalist visiting Babbila accompanied by official regime escorts on Monday saw dozens of cheering residents chant: “One, one, one! The Syrian people are one!”

Journalists saw streets completely destroyed by bombardment and fire. On Babbila’s main street, every single building had been either destroyed or damaged.

On Monday, regime troops raised the Syrian flag over the municipality of the southern suburb, which had been used as a rebel rear base until several months ago when the army laid siege to it.

Armed rebels were still present in the area, as the terms of the agreement also included an amnesty, a security source said.

According to the Syrian Observatory for Human Rights, rebels and regime loyalists have even set up joint checkpoints in some areas such as Qudsaya.

Syria’s nearly three-year war is estimated to have killed more than 100,000 people and forced millions more to flee their homes.

An activist from Damascus said the local ceasefires are strongly backed by people who lost their homes and are paying exorbitant prices for basic daily needs, amid skyrocketing inflation and corruption.

Just two key rebel bastions in the Damascus area remain in open conflict with the regime: Douma to the northeast and Daraya to the southwest.

Both are besieged and being shelled daily.

Activists say the wave of truces comes after the army turned to siege tactics after being unable to take and neutralize pockets of resistance near the capital, and as rebels failed to achieve their goal of breaking into Damascus proper.

1 Response to Community leaders take the initiative in bringing peace to Syria!