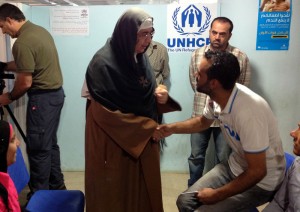 Sydney, June 16: The international spokesperson for Syria’s multi-faith grassroots reconciliation movement, Mother Agnes from the Monastery of St James in Homs, is in Australia to beg for an end to foreign interference in Syria.

As US President Barack Obama discusses further Western intervention against the Syrian regime, Mother Agnes is touring Australia until July 1 to call for a peaceful resolution. She is available from today for media interviews.

Mother Agnes has pointed out that the path for peace “is, in the first instance, an internal one, between Syrians and Syrians”.

At a side event of the UN’s Human Rights Council in Geneva on June 7, Mother Agnes challenged aspects of the latest report from the Council. She declared, “Can we know why the 85% of those displaced move naturally to regions stabilized by the government if, as alleged in the report, the government forces are killing them and ruining their properties?”
After at least one attempt on her life, Mother Agnes continues to travel across Syria on fact-finding missions and to speak to politicians, dissidents, imams, priests, public servants, humanitarian workers, victims of the war, soldiers and rebel fighters.

Some have dubbed her ‘a regime apologist’. But that label ignores the need to reconcile all who want peace.

In Australia, Mother Agnes will meet MPs, as well as government and shadow ministers. Her schedule also includes public meetings with academics, students, church leaders, and a moderated discussion with supporters of the militarized opposition in Syria.
Mother Agnes will be visiting Sydney, Canberra, Adelaide and Melbourne between June 15 and July 2.

For details of her schedule and availability for media interviews, please contact:
AMRIS.contact@gmail.com… Susan Dirgham: 0406 500 711

Check updates on the AMRIS webpage for details of public meetings: australiansforreconciliationinsyria.wordpress.com…