Will US intervention mean the end of Syria as we know it?

From where I stand, the decision by Barack Obama to arm the Syrian rebels will most likely lead us into another World War.

According to Franklin Lamb’s excellent analysis below, the US estimates another 50,000 people must be killed before they get the result they are looking for. That’s an extra 50% over the 100,000 human beings that have already been killed in the conflict. One has to imagine a similar increase in the number of displaced persons and refugees (currently numbering around five million)!

If things go according to plan for the US then it will certainly be the end of Syrian society as we know it, and another two million refugees will almost certainly lead to the collapse of Lebanon as well. Of course it is almost certain that things will not go according to plan, as Iran can’t afford to be left naked in the region (Syria and Lebanon being it’s only allies) and Russia isn’t going to abandon its naval base in Syria without a fight either!

In short, what is most likely is World War III, with Iran, Syria and Lebanon lined up on one side (backed by Russia and possibly China) and the US/Israel alliance on the other. The question then will be how many of Israel’s Arab allies will remain true to the Zionist state while the rest of the Arab/Muslim world is massacred? 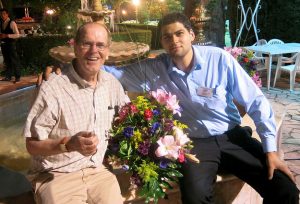 Why Obama is Declaring War on Syria

The short answer is Iran and Hezbollah according to Congressional sources. “The Syrian army’s victory at al-Qusayr was more than the administration could accept given that town’s strategic position in the region. Its capture by the Assad forces has essentially added Syria to Iran’s list of victories starting with Afghanistan, Lebanon, Iraq, as well as its growing influence in the Gulf.”

Other sources are asserting that Obama actually did not want to invoke direct military aid the rebels fighting to topple the Assad government or even to make use of American military power in Syria for several reasons. Among these are the lack of American public support for yet another American war in the Middle East, the fact that there appears to be no acceptable alternative to the Assad government on the horizon, the position of the US intelligence community and the State Department and Pentagon that intervention in Syria would potentially turn out very badly for the US and gut what’s left of its influence in the region. It short, that the US getting involved in Syria could turn out even worse than Iraq, by intensifying a regional sectarian war without any positive outcome in sight.

Obama was apparently serious earlier about a negotiated diplomatic settlement pre-Qusayr and there were even some positives signs coming from Damascus, Moscow, and even Tehran John Kerry claimed. But that has changed partly because Russia and the US have both hardened their demands. Consequently, the Obama administration has now essentially thrown in the towel on the diplomatic track. This observer was advised by more than one Congressional staffer that Obama’s team has concluded that the Assad government was not getting their message or taking them seriously and that Assad’s recent military  gains and rising popular support  meant that a serious Geneva II initiative was not going to happen.

In addition, Obama has been weakened recently by domestic politics and a number of distractions and potential scandals not least of which is the disclosures regarding the massive NSA privacy invasion. In addition, the war lobby led by Senators McClain and Lindsay Graham is still pounding their drums and claim that Obama would be in violation of his oath of office and by jeopardizing the national security interest of the United States by allowing Iran to essentially own Syria once Assad quells the uprising.” Both Senators welcomed the chemical weapons assessment.  For months they have been saying that Obama has not been doing enough to help the rebels. “U.S. credibility is on the line,” they said in a joint statement this week. “Now is not the time to merely take the next incremental step. Now is the time for more decisive actions,” they said, such as using long-range missiles to degrade Assad’s air power and missile capabilities. Another neo-con, Sen. Robert P. Casey Jr. (D-Pa.) said the opposition forces risk defeat without heavier weapons, but he also warned that may not be enough. “The U.S. should move swiftly to shift the balance on the ground in Syria by considering grounding the Syrian air force with stand-off weapons and protecting a safe zone in northern Syria with Patriot missiles in Turkey,” Casey said.

According to some analysts, Obama could alternatively authorize the arming and training of the Syrian opposition in Jordan without a no-fly zone. That appears unlikely according to this observers Washington interlocutors because the Pentagon wants to end the Syrian crisis by summers end, the observer was advised “rather than working long term with a motley bunch of jihadists who we could never trust or rely on. The administration has come to the conclusion apparently that if they are in for a penny they are in for a pound, meaning would not allow Iran to control Syria and Hezbollah to pocket Lebanon.”

Secretary of State Kerry had meetings with more than two dozen military specialists on 5/13/13. The Washington Post is reporting that Kerry believes supplying the rebels with weapons might be too little and too late to actually flip the balance on the Syrian ground and this calls “for a military strike to paralyze Al-Assad’s military capacities.” A Pentagon source reported that  the USA, France, and Britain are considering a decisive decision to reverse the current Assad momentum and quickly construct one in favor of the rebels” within a time period not exceeding the end of this summer.

Shortly after the meetings began, King Abdullah of Saudi Arabia quickly returned to Saudi Arabia from his palace at Casa Blanca, Morocco after receiving a call from his intelligence chief, Prince Bandar Bin Sultan. Bander reportedly had a representative at the White House during the meetings with President Obama’s team. King Abdullah was reportedly advised by Kerry to be prepared for a rapid expansion of the growing regional conflict.

What happens between now and the end of summer is likely to be catastrophic for the Syrian public and perhaps Lebanon.  The “chemical weapons-red line” is not taken seriously on Capitol Hill for the reason that the same “inclusive evidence” of months ago is the same that is suddenly being cited to justify what may become essentially an all-out war against the Syrian government and anyone who gets in the way.  Hand wringing over the loss of 125 lives due to chemical weapons, whoever did use them, pales in comparison to the more 50,000 additional lives that will be lost in the coming months, a figure that  Pentagon planners and the White House have “budgeted” as the price of toppling the Assad government.

“We are going to see a rapid escalation of the conflict”, a staffer on the US Senate Foreign Relations Committee emailed this observer: “The president has made a decision to give whatever humanitarian aid, as well as political and diplomatic support to the opposition that in necessary. Additionally direct support to the (Supreme Military Council), will be provided and that includes military support.” The staffer quoted the words of Deputy National Security Advisor Ben Rhodes to the media on 5/13/13 to the same effect.

A part of this “humanitarian assistance” the US is going to established in the coming weeks a “limited, humanitarian no-fly zone, that will begin along several  miles of the Jordanian and Turkish borders in certain military areas into Syrian territory, and would be set up  and presented as a limited bid  to train and equip rebel forces and protect refugees. But in reality, as we saw in Libya a Syrian no fly zone would very likely include all of Syria.

Libya’s no-fly zones made plain that there is no such thing as a “limited zone”.  Put briefly, a “no-fly zone” means essentially a declaration of all-out war.  Once the US and its allies start a no fly zone they will expand it and intensify it as they take countless other military actions to protect its zones until the Syrian government falls. “It’s breathtaking to contemplate how this in going to end and how Iran and Russia will respond,” one source concluded.

The White House is trying to assuage the few in Congress as well as a majority of the American public that it can be a limited American involved and that the no-fly zone would not require the destruction of Syrian antiaircraft batteries.  This is more nonsense.  During the no-fly zone I witnessed from Libya in the summer of 2011 the US backed it up with all manner of refueling, electronic jamming, special-ops on the ground and by mid-July a kid peddling his bike was not safe. Over the 192 days of patrolling the Libyan no-fly zones, NATO countries flew 24,682 sorties including 9,204 bomb strike sorties. NATO claimed it never missed its target but that was also not true. Hundreds of civilians were killed in Libya  by no-fly zone attack aircraft  that either missed their targets and emptied their bomb bays before returning to base  while conducting approximately 48 bombing strikes per day using a variety of bombs and missiles, including more than 350 cruise Tomahawks.

At a Congressional hearing in 2011, then US Secretary of Defense Robert Gates got it right when he explained which discussing Libya “a no-fly zone begins with an attack to destroy all the air defenses … and then you can fly planes around the country and not worry about our guys being shot down. But that’s the way it starts.”

According to the accounts published in American media, Obama could alternatively authorize the arming and training of the Syrian opposition in Jordan without a no-fly zone. That appears unlikely because the Pentagon wants to end the Syrian crisis by summers end, the observer was advised “rather than working long term with a motley bunch of jihadists who we could never trust or rely on. The administration has come to the conclusion apparently that if they are in for a penny they are in for a pound.”

In response to a question from this observer about how he thought event might unfold in this region over the coming months, a very insightful long-term congressional aid replied: “Well Franklin, maybe someone will pull a rabbit out of the hat to stop the push for war. But frankly I doubt it.  From where I sit I’d wager that Syria as we have known it may soon be no more. And perhaps some other countries in the region also.”

1 Response to Will US intervention mean the end of Syria as we know it?