Posted on September 9, 2013 by fatherdave

It may be that human shields are the last hope of preventing World War III. Certainly I am seriously looking into joining the faithful in Damascus.

According to my friend, Franklin Lamb, it’s become a race against the clock. Which will arrive first – the human shields or the American missiles! My prayer is that the shields will arrive first, and in sufficient numbers to prove decisive. 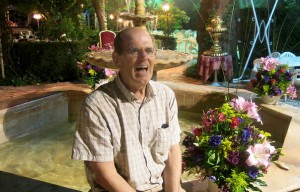 A sort of roller coaster atmosphere pervades Damascus these days with “good” and “bad” news rising and falling, often by the quarter hour. Much of the population is monitoring closely the news and quickly expressing their interpretations of the latest media reports and rumors as well as predicting the fairly precise timing of the now assumed American attack on their country.

In the very popular, and normally crowded Abaa Coffee House on the edge of the old city in what is called the Sarugha section, students and others enjoy the fine cool mist, as Damascenes have done for years, that is sprayed from ceiling pipes to provide welcome relief from the 37 degree Celsius (98 degrees F) outside temperatures. Many are clued to their laptops and/or in animated conversation analyzing the likely extent and timing of the soon believed to be arriving American missiles.

This observer often meets interlocutors in the Abaa because it’s very pleasant, large with dozens of tables, cheap and two blocks from my hotel.  I have noticed that common greetings are changing from “kif hallack”  ” (how are you?)  and “Arak lahekan” (see you later)  to “Get  home safely” and “Good luck with the checkpoints.”

But there is also a distinct growing esprit de corps and a broad coming together of much of the population here as the countdown to the American attack on Syria begins.  An evident rallying around the Assad regime, which one presumes is the opposite of what the White House was hoping would result from its threats.

A good friend from the Syrian Arab Red Crescent Society (SARCS) an humanitarian organization doing amazing rescue, and medical services for Syrians and Palestinians during this expanding crisis, described one way that her friends are preparing for the American attack.  “We gathered our important documents, birth, marriage certificate and passport and made photo copies.  Then we leave them with friends in “safe” areas or even bury them somewhere. No one knows how bad the Americans will bomb us. At work we have been told during our final practice drill last saturday that the next siren will be the ‘real thing’ and we will do as we have planned for.” She added, “Many of my friends and family are leaving but it’s not easy and is very expensive now to go to Lebanon and they don’t want us– and my family has decided to stay in our home no matter what happens in the coming days.”

One common topic being discussed is the reluctance of the American public to attack Syria and how Obama can ignore it.  “What kind of Democracy do you have that your President can ignore the will of the American public?”  this observer is frequently asked.  One soldier who is stationed with his unit just outside my hotel seemed to speak from his heart: “You Americans claim you are trying to help the Syrian people.  Every child knows, both here and in your country I think, that the coming attack will make things much worse for the Syrian people and many others. The American people are good and we hope they can control their government, but we are preparing for the worst and there will be consequences you will come to regret as with Afghanistan, Iraq and Libya.”

The government here is assuring the public that Syria is ready for the American attack and that public services will continue.  TV channels show around the clock images of heroic Syrian army exploits with marital and patriotic music. Youngsters, students and workers are gathering at presumed targets offering themselves as Human Shields in solidarity with their countrymen while challenging President Obama to bomb their beloved Syria.

Interestingly, an International Human Shield movement is coalescing according to informed sources here and abroad. One initiative is to bring 1000 Americans and thousands of others, to Syria within the next ten days to guard likely bomb sites reminding one of the International Solidarity Movement international volunteer’s efforts in Occupied Palestine in order to try to protect homes of Palestinians from Government bulldozing.

Some redacted specifics have been disclosed to this observer from an international organizing committee working around the clock on this Human Shield initiative.

Timing – While moves can be made fast and with all other key elements in place, time is not in our favor.  Ten mores days for preparation would be ideal. The HS initiative assumes that it must be done in such a way that very little time lapse from the official announcement of the action to the actual arrival of the Human Shields on the ground in Syria…

Impact – In order to achieve a significant impact having at least 1000  Americans and several thousand international Human Shields deployed in Syria is the objective. With ideally at least one representative from every UN Member State, as evidence of the true ‘international community’ opposing the American attack.

The US activist-based steering committee is quickly bringing together professionals in IT, marketing, logistical planning and implementation, spokesperson(s), public relations, accounting, documentarians, and experienced project managers. Ferries from European ports are to be arranged to carry significant numbers of Human Shields from Major European cities. Ideally, several jumbo jets will be chartered to carry human shields from some of the world’s major cities and use of land convoys are under consideration.

HS/Government Relations – The first objective of the enemies of Syria will be to portray Human Shields as nothing more than pawns of President Bashar al-Assad. This was precisely what the mainstream media did in 2003, presenting Human Shields as pawns of Saddam.  In order for the Human Shields to have power they must be seen as independent supporters of the people of Syria who represent the will of the vast majority of people around the world who oppose the pending US-led western attack. The HS should however work with prominent leaders in the civilian sector of Syrian society and great effort should be made to produce daily news stories of the Human Shields and Syrian people working together to protect Syria from the ongoing foreign instigated aggression. There are once again many details here and these would need to be discussed and agreed if any action will be able to reach its full potential.

Strategy – The sites that Human Shields deploy to must be very well publicized and these sites must be identified as protected sites under the Fourth Geneva Convention. The White House is saying that they are not going to attack infrastructure (as they did with Iraq in 2003), but they must attack the infrastructure as the goal is to drive Syria into the stone age and make it so weak that Israel will through its agents eventually take Syria over. They know that the Syrian people and military cannot be defeated without massive attacks on the infrastructure.

So it is absolutely vital that all power plants, water treatment facilities, bomb shelters (if they exist), civilian communications sites, food storage sites and other such sites that are critical to the civilian population are the primary if not sole focus of sites for the HS to deploy. They cannot deploy to military sites, although I personally feel this is morally defensible, it will neutralize the power of the HS in the public relations realm and intelligent public relations is absolutely critical.

A comprehensive list of protected sites is to be produced immediately and these sites will need to be verified by the most independent sources we can manage to obtain. UN representatives or former representatives would be great, human rights attorneys, legal experts and others of this type are very useful.

There will be room to deploy to sites not specifically listed in the Fourth Geneva Convention, such as with ethnic and religious minority communities who are deathly afraid of the foreign invaders/terrorist. Special emphasis should be placed on Christian populations as the western audience sadly has more sympathy for Christians than Muslims.”

Our goal is to personalize the people of Syria and show their suffering through the eyes of the HS with effective daily reports to be uploaded on the Internet and reported by legitimate news agencies such as Press TV, RT and Telesur. A massive effort must be made to educate the public about the reasons for the Fourth Geneva Convention (FGC) and the imperial powers undeniable record of knowingly destroying the lives of ‘protected persons’ as defined in the FGC. There must be high quality, well-spoken Arabic/English speaking spokespersons.

We should be ready to provide evidence of any attack on such sites the moment it happens and have legal briefs prepared to immediately charge the aggressors with war crimes. This is why it is critical that the HS are almost exclusively at sites that are protected by the FGC.

We cannot necessarily stop them from doing what they intend to do, but we can make their aggression harm them far more than Syria and its people in the end. Herein lays the power, using the enemies momentum against him in the most powerful way possible.

Time will tell which Americans will arrive first in Syria, the military or the American public.  Many Syrian are today praying it will be the latter and have pledged to join them to defeat the coming aggression.