Media turns its guns on Syria 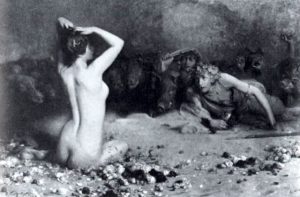 What are you looking at? … one of Aeschylus’ classics deals with, Circe, the ancient Goddess of Sorcery

In war, truth is the first casualty

THE QUOTE above is generally attributed to a Greek bloke called Aeschylus, a dramatist churning out blockbusters a good 500 years before Jesus Christ walked the earth. In the American age, however, credit more often goes to Senator Hiram Johnson who put it like this – ‘the first casualty, when war comes, is truth’.

Either way, the western media seems determined to use Syrian events to prove the sentiment as relevant today as it may have been 2500 blood-soaked years ago.

Nowhere is that clearer than in some of the material being served up by ABC Television news.

Many of the national broadcaster’s reports amount to little more than propaganda but the ABC is not alone in this.

Hundreds of thousands of people have been butchered in developing countries over recent decades as media outlets run party lines conceived in Washington, London and Canberra.

The pivotal incident in the Gulf of Tonkin, in which the US destroyer Maddox was allegedly shot up by Vietnamese attackers, turned out to be a cock and bull story.

“The overwhelming body of (military) reports, if used, would have told the story that no attack had happened,” a US National Security Agency (NSA) historian later wrote.

While the US Navy conceded it had become “clear that North Vietnamese naval forces did not attack Maddox and Turner Joy that night”.

Western journalists found a chancer called Chalabi and raised him to the status of super source. Ethics and basic professional standards flew out the window as Ahmed Chalabi beat his own personal war drum.

The New York Times was one of the earliest and worst offenders, failing to subject Chalabi and his many stories to any level of scrutiny. It preferred the hopelessly conflicted Iraqi politician to seasoned UN weapons inspectors, including Hans Blix and American Scott Ritter.

The paper took the US Government’s Weapons of Mass Destruction (WMD) talking points and popularised them.

As the war talk sharpened, it raised the propaganda stakes. Allegations about a mobile weapons lab were attributed to an un-named Iraqi engineer, while a bizarre story about plans to weaponise a virulent strain of smallpox found its way into Melbourne’s Age and the Sydney Morning Herald.

Three years after the mainstream media went to work on Iraq, it was left to specialist UK medical publication, The Lancet, to count the cost.

It said the Bush-Blair-Howard adventure had cost 654,000 Iraqis their lives. Of those deaths, it estimated, 601,000 were directly “due to violence, the most common cause being gunfire”.

Over the border, it seems, another chapter in the sordid story of war propaganda is being written.

Descriptions of Syrian President Bashar al-Assad’s forces indiscriminately slaughtering helpless people in Aleppo are all the rage in newsrooms that choose to virtually ignore claims by UN officials that rebels are preventing civilians from leaving the war zone, experienced British journalist Patrick Cockburn points out.

Beirut-based Cockburn warns readers, listeners and viewers to be wary about the stories coming out of Syria and the dodgy sources generating them.