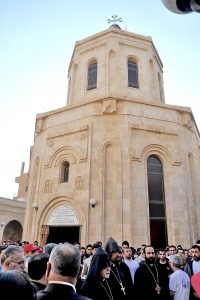 End of the road … Deir Ezzor was the final destination for hundreds of thousands of Armenians marched into the dessert by Ottoman forces. In 1991, the Armenian Genocide Memorial – church, museum, archive centre, monument and Friendship Wall – was opened in their memory. It was  blown up by DAESH terrorists in 2014 – Pic.- Creative Commons

TERRORISTS are driving Syrians out of their seventh-largest city as they prepare to make a last desperate stand at Deir Ezzor.

Multiple sources, including the Wall St Journal,  jihadi websites and American commanders, suggest the dire military situation facing DAESH is behind its move to prioritise the border city over the de facto capital of its caliphate, Raqqa.

Deir Ezzor is home to the last foot bridge between Iraq and Syria where fleeing ISIS troops can move between their former strongholds, Raqqa and Mosul.

More importantly, militants admit, it is adjacent to important oil and agriculture centres. Right now, they concede, those economic opportunities trump the symbolic importance of clinging onto Raqqa.

The Wall St Journal reports terrorists and their families are being bussed into Deir Ezzor from Mosul, in the north, and Raqqa in the south. They are driving out families and occupying their homes, claiming the locals had ties with the government of Syrian President Bashar al-Assad.

In a blow to the anti-Assad narrative being run in the West, the Wall St Journal candidly admits Deir Azzor is also important to the terrorists as a base for their chemical weapons.

“The group has used chemical weapons effectively against civilians and often poorly-equipped local forces the US relies on to combat Islamic State,” the Journal says. It attributes this intelligence to “Western officials”.

This concession weakens the often-repeated claim that ‘Assad has used chemical weapons against his own people’ bolstering the counter-argument, that it has been rebel forces responsible for their use.

That position, of course, was given credence by December, 2013 findings of the UN Mission to investigate allegations of chemical weapons use in the Syrian Arab Republic.

It found “credible evidence” that on at least four occasions, between March and August 2013, chemical weapons had been used against Syrian soldiers and, in at least three specific cases, also against civilians.

Significantly, the UN report suggested, rebels had chemical weapons, the will and capacity to use them at the time of the alleged Ghouta attack, still widely cited as final proof of the unmitigated bastardry of the government in Damascus.

Somehow, amidst all the invasion calls and threats of war crimes tribunals, the 2013 UN report signed by Head of Mission Professor Ake Sellstrom and World Health Organisation (WHO) representative, Dr Maurizio Barbeschi, appears to have slipped the collective media memory.

Its point, though, was inadvertently reinforced by several media outlets, including Australia’s ABC, who reported the discovery of abandoned ISIS chemical weapons, in the build-up to the western attack on Mosul.

The DAESH move to bolster Deir Ezzor, in preference to Raqqa, has strategic significance.

Some parties, certainly Syria and its supporters, had been concerned the US and its allies were trying to tie them up in Aleppo while Raqqa was reinforced and transformed into an alternative power centre to Damascus.

That worry may be receding but another looms large on the horizon – a possible carve out of eastern Syria that would allow the US and its allies, most actively Ankara, to establish a Salafist semi-state from Raqqa right up to Mosul and across to the Turkish border.

Deir Ezzor, and its population, have been terrorist targets since DAESH (Islamic State) and Jabhat al-Nusrah (Al Qaeda) launched attacks in 2o14. Variously known, amongst other things, as Deir ez-Zor, Deir Al-Zor, Deir-al-Zour  and Deir Ezzour, the border city …

—  the hub of a sheep and crop farming region

—  was the site of the spectacular Armenian Genocide Memorial Church, built  in 1990 and consecrated in May, 1991

— had its supply lines cut by DAESH terrorists in mid-2015

—  has received fuel and food aid from Russian, Syrian and the World Food Program air drops

—  lost two key bridges – al-Asharah and al-Mayadin – to US airstrikes in September, 2016 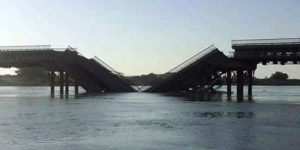