The Concluding Declaration of the Mussalaha Delegation to Syria – Friday, May 10th 2013

Syria exhibits a massive and terrible breakdown of human decency and respect. There are millions of innocent victims and many individual acts of heroism, but amongst the powerful we see an appalling degree of violence, hypocrisy and corruption. Tens of thousands have died, millions have been displaced, and nearly the entire population of 23 million lives in fear. The international community has stated and we confirm that the Syrian tragedy is possibly the worst since World War II.

States, political organisations and combatants are the primary causes of the misery, which they pursue for their own advantage, sewing terror and manipulating the suffering to reflect badly on their opponents while all too often refusing to compromise or even talk to each other.

These are the findings of our delegation, consisting of 16 human rights activists from seven countries. Over the course of nine days we visited refugee camps, affected communities, religious leaders, combatants, government representatives and many others – perpetrators and victims – in Syria and Lebanon.

We were already horrified by what we knew before coming, but what we have learned as a delegation brings shame to almost everyone involved.

We call on the international community to protect the territorial integrity of Syria and to respect the fundamental rights of Syria as a sovereign state. We deplore any intent to breach the integrity of Syria’s frontiers or to damage the unity and rich diversity of the Syrian people.

We recognise the legitimacy of the aspirations of the Syrian citizens for change, reforms, the eradication of State corruption and the implementation of a democratic life that respects and protects the fundamental rights of all citizens and minorities but we believe that effective and lasting reforms an only be achieved through non-violent means.

Our primary appeal is that all countries stop their interference in Syrian affairs – more specifically, that they halt the supply of arms and foreign combatants to both sides of the conflict. If foreign countries agree to eliminate the influx of arms and fighters, we are confident that Syrians can find their own solutions to their problems and achieve reconciliation.

We unequivocally oppose all aggression and foreign intervention against Syria under any justification. At the same time we appeal to all parties, including the government, to show restraint in response to the provocations that aim to escalate the violence and broaden the conflict.

We consider it beyond debate that the Syrian people have the right to determine their own government and their own future. Foreign interference is currently preventing the Syrian people from exercising their right to self-determination. We are concerned that such pernicious intervention is tearing apart the fabric of the country itself, with long-term consequences that can only be imagined.

The cautionary example of Iraq serves to remind us of the dire consequences of such international folly. This humanitarian crisis is already spilling into neighbouring countries. A collapse of Syrian society though will destabilise the entire region. We appeal to the international community to show that it can learn from history and make better choices in the case of Syria, which will spare further tragedy for the courageous Syrian people.

Secondly, we appeal to the international media to stop the flow of misinformation regarding the Syrian conflict. We believe that every Syrian, both in and outside the country, should be given the right to be heard and we do not see this reflected in the international coverage of this crisis.

Thirdly, while we entirely support the embargo on arms, we ask the international community to review and reconsider the crippling sanctions that are taking such a heavy toll on ordinary Syrian people.

Fourthly, we urge the international community to take seriously the vast number of refugees and persons who have been internally displaced by this conflict.

We look towards the cessation of all violence when these people might be allowed to return to their homes. In the meantime, however, humanitarian aid efforts must be expanded to meet the basic needs of such persons.

Our earlier report, the “Declaration of the Mussalaha Delegation to Syria on the Refugee Situation in Lebanon”, outlines the inadequacies of current refugee programmes. We appreciate that various government authorities have attempted to respond to the refugee crisis. We recognise though that the International Committee of the Red Cross and its affiliates, as well as other humanitarian agencies, must be allowed to set up centres inside Syria to care for internally displaced persons, so as to prevent these displaced persons from fleeing to foreign countries.

This work requires immediate and significant funding by the international community. While this will be a costly undertaking, we believe that the costs will in fact be only a fraction of the amount currently being spent on destroying Syria.

Finally, we appeal to all parties involved to put an end to all forms of violence and human rights violations – actions that target and terrorise innocent civilians and prisoners, indiscriminate terrorist attacks on the civilian population, the unjustified systematic targeting of vital state infrastructures, civilian installations, industrial zones, factories, communication facilities, agriculture reserves, health centres and hospitals, schools and universities, and religious and cultural landmarks – all of which results in the transformation of the residential areas into war zones, resulting in the flight of the civilian population.

We likewise oppose the use of religious decrees that encourage, trivialise and justify barbarity, rape and terrorism. We appeal to the entire religious community to call the faithful to nonviolence and peacemaking, and to reject all forms of violence and discrimination.  We express our admiration and respect for the many Syrian religious leaders who have refused to endorse the use of violence and have dedicated their lives to working for a peaceful solution to this conflict, and we appeal specifically for the immediate release of the two abducted Christian bishops, both of whom were dedicated to the work of peace and reconciliations, as we appeal for the release of all Christian and Muslim clerics and other abducted Syrian citizens.

We conclude by commending the work of Mother Agnes Mariam and the Musalaha initiative. We have witnessed their work inside diverse communities across Syria. We offer our unequivocal and ongoing support to these brave people, and we commit ourselves to continue to work alongside them until Syria is truly at peace.

We  thank the Patriarch, Gregorios III Laham, for his kind invitation and his ongoing support for Mussalaha. We likewise thank Mr. Jadallah Kaddour for his generosity that made our visit possible, and we express our gratitude  to all those who have facilitated our path, most especially the Organization Committee of the delegation’s visit and the Popular Council for the National Reconciliation.

Mairead Corrigan Maguire in the name of the International Delegation to Syria for Mussalaha and Peace. 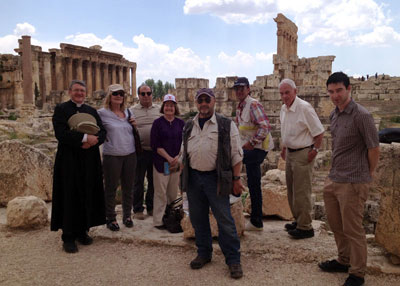 Mussalaha team members at Baalbek preparing to cross into Syria

Signatories from the Mussalaha Delegation to Syria:

Francesco CANDELARI (Italy) His current role is International Coordinator of the International Fellowship of Reconciliation and he has held previous positions at the United Nations and as journalist covering the Arab Spring. He has been in close touch with people from Syria and interested in looking for possible nonviolent solutions to the conflict in Syria.

Marinella COREGGIA (Italy) Italian journalist and writer in the field of ecological justice; and an ecological farmer, Marinella Correggia, has been active for peace since 1991. Associated with the No War Network, she co-organised many demonstrations in Rome, petitions to the UN, sending information to some Un missions in Geneva, writing articles and conferences.

Denning ISLES (Australia) is a graduate of Welsey Institute, majoring in Audio Technology (2008). He currently works for Fr. David Smith with Fighting Fathers Ministries, in which he supports various youth and community organisations such as Dulwich Hill’s Holy Trinity Youth Center, Binacrombi Camp Site and the Dulwich Hill Gym.

Franklin LAMB (USA) is an international lawyer based in Beirut-Washington, DC. A former Assistant Counsel of the House Judiciary Committee of the US Congress, Lamb has written widely on Middle East issues as part of his commitment to the cause of Palestine.

Paul LARUDEE (USA)is a former Ford foundation project supervisor, and Fulbright-Hays lecturer in Lebanon, and a U.S. government advisor to Saudi Arabia. He has been a faculty member at several universities in the San Francisco Bay Area,an organizer with the International Solidarity Movement in Palestine and co-founder of the movement to break the Israeli siege of Gaza by sea, and was aboard the boats that succeeded in doing so in 2008 as well as the Gaza Freedom Flotilla, which was attacked by Israeli forces on May 31, 2010. He is a cofounder of the Global March to Jerusalem.

Amir M. MAASOUMI (Canada) is a sociologist, specialist of contemporary Islam, intercultural and interfaith relations, dialogue among cultures and civilizations. He is also a peace, social justice and human rights activist.

Michael MALOOF (USA) is a senior writer for WND (WND.com…), or World Net Daily, specializing in international political and economic reporting and analysis. He also writes a weekly column for subscribers only for WND’s G2Bulletin providing analysis in these areas. As part of his reporting, Maloof travels many times a year to Lebanon where he is expected to set up a bureau there for WND.

Ann PATTERSON (Ireland) is a family therapist at the Quaker Centre in Belfast, she works to provide counseling support for families from the divided communities. During the peace process in Northern Ireland, she worked with imprisoned paramilitaries from both sides, preparing them to enter into peace talks. She is founder member of the Peace People, a pacifist movement that played a critical role in promoting the Good Friday Agreement and advancing the peace process in Northern Ireland.

Antonio Carlos da Silva ROSA (Brasil) is the editor of TRANSCEND Media Service-TMS since its inception in 2008, he is also the Secretary of the Board of Conveners of TRANSCEND International-A Network for Peace, Development and Environment, founded by Johan Galtung in 1993.

Father Dave SMITH (Australia) started Fighting Fathers Ministries in 2002 – a company that aims to offer an alternative culture to young people, based on values of courage, integrity and teamwork. This work has been the subject of numerous TV documentaries and one short film. Particularly well-known for our use of boxing-training as a means to help young men overcome anger-management issues. He was twice nominated for Australian of the Year on the basis of this work. He is known for his friendship with Mordechai Vanunu (the Israeli ‘nuclear whistle-blower’), which started in Sydney in 1986, started my involvement in social justice work in the Middle East and has subsequently developed a strong profile in Australia as a Palestinian human rights activist.