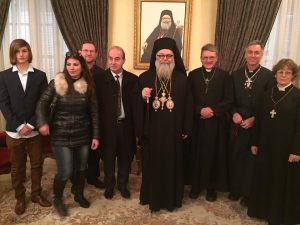 As the latest ceasefire settled across Syria’s killing fields, Father Dave and several other Australians of goodwill, were in the air. He put these thoughts together as a new Damascus year struggled to kick clear of the shadows of dark years past.

AT FIRST glance, Damascus doesn’t appear all that different from any other major city. The girls are as pretty as ever and the streets are full of cars, noise and teeming life. Kids are everywhere.

The guy I share the elevator with smiles and greets me. We could be anywhere, though the semi-automatic weapon across his shoulder is a clue that all is not well in this part of our world.

In truth, the Syrian people continue to push forward with life, but six years of bloody violence has taken a toll. It has wearied the body and soul of the nation. Jobs are scarce and wages are ridiculously low, and now this damned water shortage is making people ill as well as frustrated.

From what I’ve heard, it was the US-supported ‘moderate’ rebels who poisoned Damascus’ water supply – mixing diesel in with the drinking water.

‘Don’t buy food from the street stalls, my friend warns me. He is recovering from what he says is the worst case of food poisoning he has ever experienced. Without clean water, food is no longer being prepared hygienically.

Of course, I’m privileged. I have choice of being able to eat at nice restaurants and there are some very nice restaurants still doing business in this city. And, I can restrict my drinking to bottled water.

The only inconvenience I experience is drinking my coffee from disposable cups because there is no longer enough clean water to wash the crockery.

Most people in my own country wouldn’t know these problems existed. Understandably, we have been conditioned to only think of the tragedy of this war in terms of battlefield casualties.

A war like this, however, a war that continues to get dragged out as the US and its allies maintain a flow of weapons to an ever-shrinking group of ‘rebels’ – well, a war like this damages everybody, eventually.

“We just want the fighting to stop and for life to return to normal,” that’s what I hear Syrian people saying, over and over again.

In fact, that’s all I’ve heard from the Syrians I know for the last five years. It seems it is only us foreigners who want to keep the fire burning because, apparently, we haven’t achieved our goals in Syria yet.

Perhaps it’s time that we put our goals to one side and gave the Syrian people a break!

This entry was posted in Uncategorized and tagged Father Dave, syria, US, war. Bookmark the permalink.