Beyond tolerance – Syria as a model for religious integration and harmony 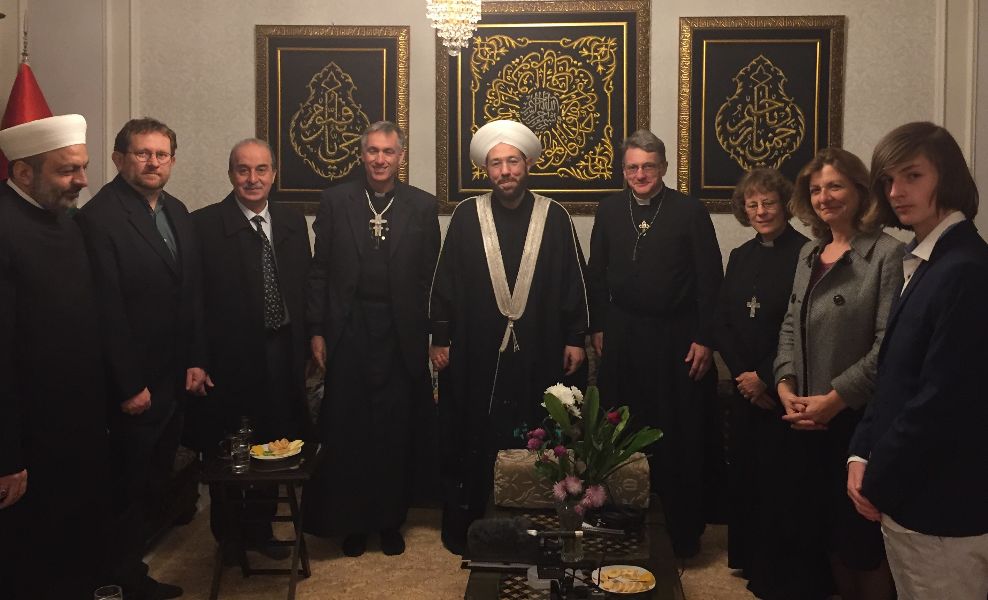 Father Dave has just returned from a moving visit to war-ravaged Syria. One of the hard lessons he learned is that, in the face of aggressive, ‘takfiri’ Islam, Australians might need to rethink their attitudes to religious tolerance.

DIVINE Service in a Greek Orthodox church is always a special experience, but this year’s New Year’s Day service in the Mariamite cathedral in Damascus was unlike anything I had experienced.

It wasn’t the singing, the liturgy and the colour that was so unique. It was the appearance of the Grand Mufti of Syria, who joined the celebration about half way through the service!

There are no parallels to this in the ecclesiastical universe in which I live. It’s not that we don’t, from time to time, have guests from other religious traditions attending our worship services, though this is rare enough. It was the way the Mufti entered the church unannounced, half way through the service, and made himself at home!

He didn’t partake of the Eucharist, of course, but in every other way the Mufti just blended into the congregation. He seemed very much at home in the church, and the congregation seemed to be very comfortable with him and his entourage of Sheikhs (distinctive in their flowing gowns and turbans).

The Mufti and the Archbishop took turns addressing the congregation at the end of the service. Both spoke of the importance of their religious communities working together in the rebuilding of Syria, and of our common belief in a God of love. At the end of their speeches, the two embraced warmly, and then got on with their days!

As I say, the Syrian model of religious cooperation is without parallel in the Australian context. Meetings between different faith groups, in my experience, are generally nervous affairs. Participants do their best to conceal their suspicions of the ‘other’, with Christians regularly over-compensating by pretending that we have favourite verses in the Qur’an that we then try to recite and invariably get wrong!

Christians and Muslims in Syria have had thousands of years to get used to one another, and it shows! In the old city of Damascus, you regularly find ancient mosques and churches that were built side by side, and in some cases, such as with the grand Omayyad Mosque in Damascus, you find a mosque that used to be a church, still enshrining specifically Christian relics within its walls, where Christians are welcome to come and pray.

None of this is to suggest that Christianity and Islam have been blended together in Syria, as if the two religions had lost their distinctive identities and dogmas. Far from it! This was something that the clerics I spoke to (both Christian and Muslim) were very insistent on.

“In my country, we normally try to foster religious harmony by downplaying our differences”, I said. “No, No!”, said Father Toufic of Maaloula. “This is not the way!”

Toufic‘s words were simple and yet profound, and particularly so given the painful history his parish had experienced.

In September 2013, Jabhat Al Nusra had overrun the little Christian village of Maaloula. They had murdered the three men at the entrance gate who had refused to convert to Islam. They shot and killed and kidnapped, and committed all kinds of atrocities against the people of Maaloula until the town was eventually retaken by the Syrian Arab Army some months later.

Of course, the people of Maaloula did not blame Islam as such for their misery. They knew that the Islam of Jabhat Al-Nusra was in no way representative of the broader religion of the country. The problem in Maaloula’s case though was that it had been one of the handful of Muslim families in the village that had betrayed them and helped Jabhat Al-Nusra launch their initial attack!

It was with this in mind that I had asked Father Toufic how his parish had managed to go on living in harmony alongside these Muslim families, despite their history. Toufic answered, as I’ve outlined above, in terms of love, but he went further.

“We must live with them and, more than this, we must live for them! This is our mission as the church! If we cannot do this, then who are we? We are not the church!”

What I saw in Father Toufic and in his beautiful community was something of an archetype for the rest of the globe. Here was a community that had experienced the most terrible kinds of inter-religious violence and yet they were moving forward together in harmony, not by overlooking differences or by denying the past but by holding fast to their fundamental religious values!

Maaloula is, of course, about as extreme an example of a relationship breakdown between religious communities as you can get. Most Syrians have never experienced these sorts of difficulties (despite all media narratives to the contrary). There are some very visible Islamic militants, of course, but these ‘takfiri’ (as they are popularly termed there) are very much on the periphery of Syrian society. They are not considered to be real Muslims at all by most Syrian members of the mosque community, and the government is very clear in its denunciation of all forms of militant Islam.

This again is where Syria stands in sharp contrast to Australia and to all Western/European countries. Syria has an official ‘Ministry of Religious Affairs’ that encourages the development of various religious groups within the country. However, the Ministry has very clearly defined boundaries as to what is an acceptable form of religion and what is not, and the Islam of the takfiri (associated normally with the Wahhabism of Saudi Arabia) is completely and explicitly excluded.

I spent some time in dialogue with the head of the Ministry of Religious Affairs – himself a Sheikh with a doctorate in theology behind him. I said to him “our government generally tries to minimise the influence of religious groups in Australian society, but where religion is given a voice, we try to give every group an equal say.”

“This is a big mistake”, the Minister said. “We have been dealing with religious extremism for a lot longer than you and we have learnt that freedom of religion can only be exercised within clearly defined boundaries”. He then added rather ominously, “your time is yet to come”.

I came away from that meeting with a series of official publications produced by the Ministry, including a weighty hardback book, written by the Minister himself, entitled “The Intellectual and Ideological Basics of Combating the Extremism and Takfiri Terrorism of so-called Political Islam”  The other thing I took away from that meeting was a realisation that we in Australia need to learn from the Syrian experience if we are going to weather the storm ahead!

The only politically enshrined religious ideal we have in our country is ‘tolerance’, which plays out as a sort of insipid recognition of the validity of all religious traditions. This seems to have worked for us thus far, when the worst religious violence we’ve experienced was a long-distance battle between Catholics and Protestants over the occupation of Ireland. With the birth of Islamic State and other takfiri groups though, the stakes have been raised significantly higher. It’s time we rethought our approach.

The Syrian model offers us a different way forward altogether – one of encouraging religion and religious diversity, but within clearly defined boundaries, and those boundaries exclude all forms of Wahhabi Islam.

For the reality is that Wahhabism has never been more popular in Australia than it is right now! Money has been pouring in from Saudi Arabia for some years now and the effects are starting to take hold. My fear is that the premonition of the Syrian Minister of Religious Affairs – that ‘our time is yet to come’ is entirely correct, and that we will be in no way prepared to meet the challenge when our time comes.

I long for the day when the Grand Mufti of Australia will walk comfortably into one of our Cathedrals on New Years’ Day and embrace the Bishop, and I do believe that this could one day happen. Even so, I expect that a lot of hard thinking and hard work on the part of our political and religious leaders will need to take place first.