Tulsi goes to Damascus … and the world waits 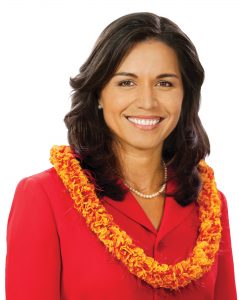 RISING Democratic Party star Tulsi Gabbard has lobbed a pigeon among the cats of the US foreign policy establishment with a secret “fact-finding” trip to Syria.

The claws came out after the Hawaiian Congresswoman’s office conceded she had met  several Syrian Government officials before flying out of Damascus on January 18.

Independently, news agency AFP reported the delegation she was on had also visited parts of Aleppo held captive by Islamic extremists until late last month.

The Atlantic magazine immediately branded her “the GOP’s favourite Democrat” and suggested the visit might have breached the Logan Act, which, apparently, makes it unlawful for “unauthorised” Americans to visit countries in dispute with the US.

Gabbard’s office cited security concerns for refusing to comment on whether or not she had met Syrian President Bashar al-Assad during her visit, according to the  US magazine Foreign Policy which broke the story.

“She felt it was important to meet with a number of individuals and groups, including religious leaders, humanitarian workers, refugees, government and community leaders,” Foreign Policy quoted a Gabbard spokesperson as saying.

The ‘neither confirm nor deny’ stance is being widely interpreted as confirmation the Congresswoman did, in fact, take the opportunity to meet with the Syrian leader.

This could be a significant development as Gabbard was one of the first politicians Donald Trump sounded out, from either party, after winning the US presidential college vote, sparking suggestions she could be in line for a senior cabinet post.

There is now speculation that her “private” Syrian visit might have been made, formally or informally, on behalf of the new administration

Gabbard’s November meeting with Trump followed years of campaigning against US involvement in what she calls “interventionist, regime change warfare”.

Gabbard has also been a consistent and outspoken critic of Salafist Islam.

American commentators suggest those positions were strongly influenced by her experiences on two tours of duty in Iraq with US armed forces.

“I don’t think Assad should be removed,” Gabbard tells CNN in this November, 2015, interview

“If Assad is removed and overthrown, ISIS, al Qaeda, al Nusra – these Islamic extremist groups will go straight in and take over all of Syria.”

In December, she introduced the Stop Arming Terrorist Act into Congress, which would make it unlawful for the US to continue arming and funding Sunni terrorist groups trying to overthrow the government in Damascus.

Gabbard’s uncompromising positions on Syria and the Middle East have attracted harsh criticism from supporters of the traditional Republican-Democratic order. Middle East expert and professional think tanker, Charles Lister, has dismissed her an “Assad apologist”.

But the surfing congresswoman has spent the past 12 months making political waves.

Her tete a tete with Trump was not the only spanner she  biffed into the works of the Democratic Party establishment, last year. In February, she sensationally quit her role as deputy chair of the Democratic National Committee so she could champion Bernie Sanders’ tilt at the presidency.

She was one of three people who formally nominated Sanders as her party’s candidate at it’s national convention in July.

Who the heck is Tulsi?

Tulsi Gabbard might be an American career politician but she is not your standard model – oh no. Here are 10 things that make her stand out from that crowd.

She is, amongst other things … 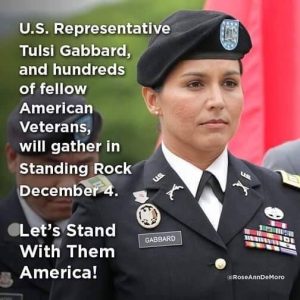 —      a former opponent of same sex marriage who became a co-sponsor of the US
Respect for Marriage Act
—     an environmentalist whose congressional campaign was endorsed by the
Sierra Club
—     a leading campaigner against the Trans Pacific Partnership (TPP) which, she said,                would have boosted Wall St at the expense of workers and the environment

Sources for this article included Reuters, AFP, The Atlantic, Foreign Policy, Vogue and, of course, Wikipedia