Syria has won the war! (almost) 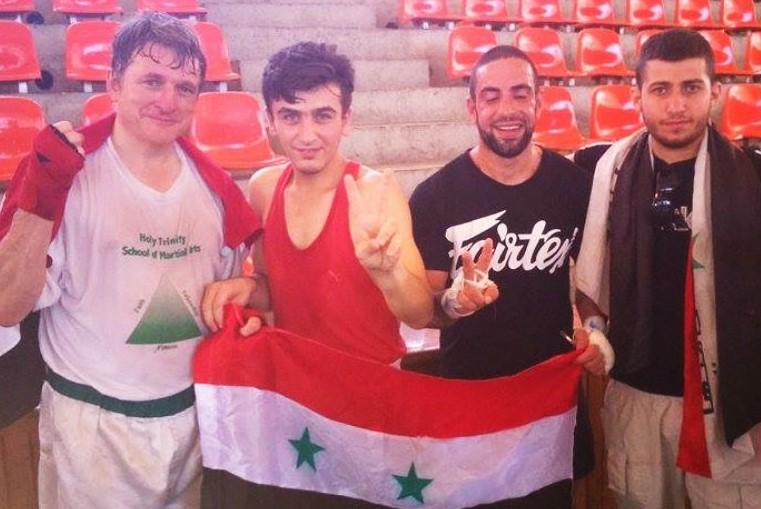 Boxers for Peace in Lattakia (Syria) 2015

Traditional wisdom tells us that we shouldn’t count our chickens before they hatch. Even so, it is hard to resist celebrating the most recent developments in the war on Syria. Thanks to a bit of help from mother Russia, it seems that we are on the verge of victory, and the winner is … Syria!

I appreciate that this statement may seem nonsensical to those who see the death and destruction in Syria as being the result of a civil war but I just can’t take such commentary seriously any more! I think of the young Syrian soldiers I’ve spoken to, many of whom have never seen a Syrian on the other side of the firing line! No, while there certainly have been Syrians involved, this has been a foreign-led and foreign-funded insurgency from the very beginning. To quote the late, great Father Franz Van der Lugt – the aging Catholic priest of Homs who was shot in the head by rebels in April 2014 (only a week before I arrived in Homs myself): “I have seen from the beginning armed protesters in those demonstrations … they were the first to fire on the police. Very often the violence of the security forces comes in response to the brutal violence of the armed insurgents”

Of course this is not the story we in the West have swallowed. In truth, our capacity for gullibility never ceases to astonish me. The most recent example of our astounding levels of credulity has been the way we all bought into the current Syrian refugee crisis. I’m not suggesting that there isn’t a crisis, of course, but I am astonished at how few people have asked why the Western world has all of a sudden been swamped with a wave of refugees when the war has been raging for five long years. Why did all these poor people wait until now to seek our shores?

I think it is impossible for a thinking person not to realise that there is more going on in this war than is contained in the narrative we have been fed, most especially the lie that all of the violence can be traced back to one man – Syria’s evil dictator who is personally responsible for every death and every displaced person! The truth is far more complex – an intricate web of political power plays with the US and Israel and their Gulf-state affiliates vying with Iran and its allies for economic control of the region.

I have given a more detailed analysis of that elsewhere. Let it suffice here to say that America’s recent move – to start bombing Syria on the pretext of destroying ISIS – was a final attempt to initiate a change of government in Syria that they could then have justified on the basis of dealing with the worldwide refugee crisis at its supposed source.

But Putin called Obama’s bluff – ‘Do you guys want to get rid of ISIS? Good, we’ll help you!’ – and all of a sudden Russian troops and armaments started to appear in Syria! Moreover, early indications are that the Russians are deadly serious about getting rid of ISIS, unlike the US who, after a year of bombing campaigns, only seems to have succeeded in pushing the jihadists further into Syria!

And so a predictable (and predictably ludicrous) shriek of horror and surprise arises from the Western alliance “what is Russia doing in Syria. We don’t trust Russia!”. We’ve had a joint statement from the governments of France, Germany, Qatar, Saudi Arabia, Turkey, United Kingdom and USA expressing “ deep concern with regard to the Russian military build-up in Syria”.  Even the Australian Federal Justice Minister, Michael Keenan, has got in on the act, saying that “The problem is their motives are just not trustworthy”!

What is there that is difficult to understand about Russia’s involvement? Russia has a naval base at Tartous in Syria. It’s Russia’s only military foothold in the region and in the entire Mediterranean. Russia also has economic ties with Syria. It’s in Russia’s own self-interest to have Syria on its feet just as it’s in the self-interest of the US and its Gulf State allies to have Syria on its knees. The big picture is not hard to understand.

I guess we get confused because we somehow believe that the only reason the West is involved in Syria is because we care so much about the Syrian people and want to free them from tyranny and spread democracy, etc., just as we did so successfully in Iraq and Afghanistan and Libya – three countries that continue to burn uncontrollably thanks to our ‘humanitarian intervention’. And I guess we really believed that all the Western efforts at establishing a ‘no fly zone’ in Syria were with a view to damaging ISIS, even though ISIS has no air force (meaning that it would only affect the Syrian air force).

You don’t need to be a genius to see what’s going on here! The average high-school student should have no trouble putting the pieces together. Russia has just as much self-interest at stake in this war as all the other players. I’m just thankful that Russia’s self-interest aligns with the preservation of the Syrian people. There is though one significant difference between the Russian and US military involvement – namely, Russia’s actions are entirely in compliance with International Law whereas the US and its allies are flouting the law!

And if there had been any lack of transparency to the Emperor’s latest set of new clothes, that surely must have evaporated completely with the publication of Julian Assange’s latest book, ‘The Wikileaks Files’. In the chapter on Syria, Assange publishes a 2006 cable from US Ambassador to Syria, William Roebuck, that discusses a plan for the overthrow of the Assad government.

The plan was to use a number of different factors to create paranoia within the Syrian government and so push it to overreact, while simultaneously fostering tensions between Shiites and Sunnis. This blueprint for the so-called ‘civil war’ had been developed five years before it was actually put it into play, and the whole drama might gone according to plan had not Putin intruded – a man who obviously hadn’t read the script!

And so for the first time ISIS is on the run! Jihadists are pouring back into Iraq and Jordan and looking for exits from the battlefield wherever they can find them, while the Syrian Arab Army liberates long-lost villages from the rule of Sharia law. Meanwhile the Western alliance bumbles in protest, claiming that Russia is targeting not ISIS but ‘moderate rebels’ – members of the elusive ‘Free Syrian Army’ who, as one commentator put it, are really now nothing but “a brandname without a product”.

So what happens next? There is a real possibility that the war will be over by Christmas!  As I’ve said repeatedly, the foreign insurgency will only last as long as its financiers from Qatar and Saudi Arabia consider the war to be a good investment! If Russia continues to do real damage to the ISIS infrastructure there will come a point (and it may come very soon) when those pouring in money will decide to cut their losses and turn off the flow of cash. If this happens, ISIS, like a B52 suddenly running out of fuel, will crash to the ground like a lead weight!

Of course there is also a fear that Russia’s entry into Syria could mark the beginning of World War III, and there are eerie similarities between the current scenario and the lead-up periods to both the first and second world wars.  Alliances are forming, sabres are rattling, and both Obama and Netanyahu seem to be itching for a fight! But I don’t think the US is going to go to war over Syria. I don’t think it can afford to, and I don’t think Israel will go to war without US support.

What I’m expecting (and hoping) to see is both the US and Israel slink away from any direct show-down with Russia. They will bluster and carry on with plenty of aggressive rhetoric but it will all be for domestic audiences who still need to believe that their leaders are mighty men of valour and not simple fools! Meanwhile the Syrian people will get back on their feet and start to rebuild their country! What a wonderful Christmas present that would be! It would be God’s gift to the world with Vladimir Putin’s signature unmistakably on the card!

3 Responses to Syria has won the war! (almost)