the Syriac Orthodox Church – a light shining in the darkness! 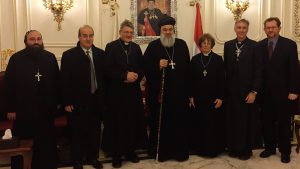 January, 2017 – our Australian delegation had a wonderful time visiting the Syrian Orthodox Patriarchate in Damascus.

While there, I had the privilege of interviewing his grace, Ignatius Aphrem II – the Syriac Orthodox Patriarch of Antioch. Three minutes into the interview all the lights went out and we sat in complete darkness. The Patriarch continued with his dialogue uninterrupted. These people are so used to power outages that they don’t allow them to interfere with their routine.

The other highlight for me was meeting Father Jack, who was so concise and articulate in his wisdom that I had to ask him to say a few words to the camera.