The Syrian people have spoken and they want to keep Assad! 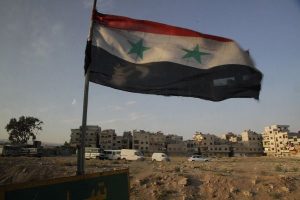 I did not vote for Bashar Al-Assad.

I didn’t vote in the Syrian elections at all because I am not Syrian! If I had been Syrian I don’t know if I would have voted for Assad. I really didn’t take a close look at the persons running against him, and why would I? I’m not Syrian!

As an Australian, it’s none of my business to decide who runs Syria! Why can’t the rest of the non-Syrian world accept this simple fact – that who holds public office in Syria is not our decision? Moreover, the Syrian people have spoken unambiguously as to whom they want running their country. Assad scored roughly 90% of the vote!

To those who have labelled the election as farcical and illegitimate, a few pointers:

Firstly, the voter turnout was incredible! Apparently 72% of those who were able to vote did vote and, according to my friends who went to Syria as neutral observers of the election, there was no evidence of coercion or fraud.

Secondly, while those who voted from within Syria were all from government-controlled areas, that actually accounts for about 90% of all Syrians still living in Syria. Government forces now control all of the major cities. It’s only the outlying rural villages that are controlled by the rebels now.

Thirdly, the voter turnout in countries like Lebanon was extraordinary! Millions of refugees cast their vote, and they voted overwhelmingly for Assad!  The Western media had no explanation for this so they simply ignored it!

Of course those who refuse to accept the outcome of the election are not Syrians but are more likely to be Americans.

John Kerry said that the very idea of holding an election during a civil war was outrageous. I guess he was relying on the fact that there are now no Americans still living who can remember the re-election of Abraham Lincoln who won his second term right in the middle of the bloody US Civil War. I can’t imagine Kerry thinks that the non-participation of the Confederates in that election (almost all of whom would have voted against Lincoln) delegitimised it, even though Confederates made up one third of the total population!

In truth, I don’t think we can take the U.S.A. seriously any more as an arbitrator of electoral fairness (if we ever could). We’ve recently watched Washing give its imprimatur to sham elections in both Egypt and the Ukraine, where empty voting booths in both cases testified to the vacuous nature of these attempts to give respectability to governments that had seized power by military coup.

No. The response of the US to the Syrian election is entirely reminiscent of their response to the election of Hamas in Palestine in 2006. There was really no question that the results were fair and representative of the will of the people. The problem, so far as Washington was concerned, was simply that the people had elected the wrong candidate.

Of course the problem in the case of Syria is that there was no US-preferred candidate on the ballot papers! If things had been different and if Obama had been given the green light to carpet-bomb Damascus last year we would ended up with Syrians being given a choice between a handful of US puppets, with none of the key rebel groups (let alone Assad supporters) being allowed to participate!

So this is where we are up to in what we call the ‘War on Terror’, or was it the ‘Battle for Democracy and Freedom’, or was it the ‘Civilizing of the pagan world’? No … I think that last one was either the Nazis or the crusaders (or both). Either way, it’s the same rampaging machine of imperial violence that has cursed humanity in every age, wearing, as ever, that same transparent veil of self-righteous moralism.

How do we stop this machine of death? That’s the question! I’m not sure, but I am sure that one of the initial steps will be learning to respect the rights of a people to control who their own elected officials are and, in this case, this means respecting the fact that the Syrian people have chosen to stick with Bashar Al-Assad!

2 Responses to The Syrian people have spoken and they want to keep Assad!