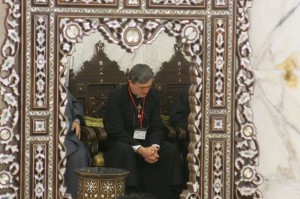 Father Dave in the Ommayad Mosque in Damascus

So many crazy things are happening in the hell that is flowing from Syria into Iraq at the moment that it’s hard to know what is going on. As Christians we need to make a meaningful response to all this bloodshed and violence but it’s so hard to know where to start. Let’s begin then by anchoring ourselves to one unambiguous truth – that the U.S. and NATO are NOT particularly concerned about what ISIS will do to Iraq, despite all rhetoric to the contrary.

Why can we start with this as our bedrock truth? Because the Lord Jesus gave us a guiding principle that allows us to cut through all the propaganda that clouds such issues: “Where your treasure is, there will your heart be also” (Matthew 6:21). This is as true of countries as it is of individuals. It isn’t our rhetoric that indicates where our heart is. It’s our wallet!

If you want to know where the heart of the U.S. and NATO are don’t listen to their rhetoric. Rather, watch what they do and see where they invest their money! In the case of the ongoing violence across the Levant, there is no ambiguity. The U.S. has been continuing to pour money into their her allies in the region – Israel, Saudi Arabia and Qatar, and at least two out of three of the above are actively funding offshoots of Al Qaeda – ISIS and Jabhat al-Nusra – and have been doing so for years!

Yes, there seems to have been a marked change in the policies of both NATO and the U.S. recently. While Britain had been portraying the ISIS team as the spiritual descendants of Robin Hood and his merry men engaged in ridding Sherwood Forrest of its evil prince, last week the Brits suddenly decided that ISIS was a terrorist organisation after all! Likewise, whereas the U.S. had been looking on happily as those merry rebels employed sophisticated American weaponry against Assad, now all the smiles have been replaced with looks of shock and horror as those weapons are turned upon Iraq!

But the shock is only apparent. The looks of horror are hollow. The rhetoric is empty. How do we know? Watch where they are putting their money! Are funds being withdrawn from ISIS’s main funding agencies? Are the Saudi’s being summoned to the Whitehouse to answer for their role in this new round of violence? Has anything of substance actually changed?

Some have suggested that this entire ISIS invasion has been orchestrated by the U.S. as another attempt to accomplish regime change in Syria. This is unlikely, I think. The U.S. no longer has the financial resources to roll out such an ingenious plan of destruction. Of course, even if ISIS’s latest movements were not supervised by the US they may have provided Washington with the opportunity to start reigning death on all the ISIS-controlled regions, including Syria. Happy days in the Whitehouse?

Well … I don’t think we are going to see the U.S. or NATO put troops on the ground any time soon. The outcry from their relative constituencies will be far too great to ignore and, again, who can afford this sort of foreign adventure at the moment? We may well see a token number of tomahawk missiles fired off in the general direction of ISIS and/or Assad – a sufficient number to satisfy the shareholders of the major arms manufacturers – but none of the major Western war-lords can manage another full-scale invasion right now.

Besides all this, regime change in Syria was never Obama’s end-game in the Levant any more than the defeat of ISIS is now. Iran was always the real target and this latest development may give the U.S. a direct shot at Iran!

For those who aren’t familiar with the war that’s been waged on Iran by the U.S. and her allies for the last 60-something years, here’s a bit of history:

The history of the relationship between the U.S. and Iran since that time has been one of unrelenting aggression of the former to the latter. Sometimes this has been overt, as with U.S. support for Saddam Husain in the Iran-Iraq war (that cost over a million lives). Sometimes this has been covert, such as through CIA efforts to fan the flames of sectarian division between Sunni and Shia (with the fabulous results that are now plain for all to see). Always it has been economic, with sanctions having been in place since the first days of the Iranian revolution – sanctions that not only inhibit trade but prevent the sick from accessing medicines and teenagers from accessing Facebook!

Why has Iran always been such a hated enemy of the U.S. ever since the days when it was a model secular democracy? It’s all there in Matthew chapter 6. The Iranians have treasure, and lots of it, and the U.S. and NATO have always had their hearts set on it! Moreover, if left unmolested, Iran would quickly become the most powerful economic force in the Levant, and so it poses an economic threat (nb. ‘economic’ not ‘existential’) to America’s and NATO’s middle-eastern allies.

Understanding the economic threat posed by Iran to the traditional economic power-players of the region is the key to comprehending much of the violence that has taken place across the region over the last generation, and most obviously in the last three years. In truth, no one in the West would have been remotely interested in the antics of Bashar Al Assad had Syria not been Iran’s closest ally? Likewise Hezbollah’s activities in the region would have gone largely unnoticed had she not been Iran’s only other ally. Iran is the target. The rest are just the supporting cast, and this latest development with ISIS and Iraq opens up entirely new opportunities for US-Iranian violence!

But of course the rhetoric is all the other way. There is talk of Washington and Tehran working together! It seems that both great powers now have a common enemy and that circumstances have serendipitously pulled them together to fight against terrorism side-by-side. Don’t believe it!

I’ll wager that the U.S. is not going to support Iranian military incursions into Iraq except perhaps by clapping and cheering (in a very muted kind of way). I don’t think this new era of US-Iranian cooperation is going to cost the US partner anything. Conversely, we may see Iran bleed to death economically through involvement in another protracted war, with Washington mouthing regret while continuing to indirectly fuel the furnace!

Perhaps I’m wrong. I hope and pray that I’m wrong. I hope and pray that Iran and the U.S. and all the countries represented in NATO will enter a new era of cooperation and dialogue and friendship. If you listen to the rhetoric that seems to be highly likely. But I haven’t seen anyone take their hands off their wallets yet! Western money is still pouring into Saudi Arabia and Qatar, and through them into the pockets and cartridge-boxes of ISIS. Until I see a change in spending habits I’m not ready to believe in a change of heart.

1 Response to Iraq, ISIS and Syria – what’s going on?!