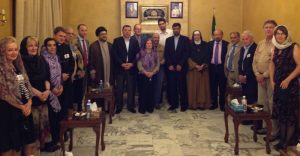 The summary conclusion of the Mussalaha delegation is that Syrian refugees in Lebanon are forced to rely mainly on their own resources and Lebanese hospitality, both of which are strained to the limit and portend a humanitarian tragedy when they are exhausted.  Lebanon hosts a disproportionate share of refugees in both absolute terms and relative to its population (4.3 million).  Reliable numbers are unavailable, but the most commonly quoted refugee figure is one million persons.

Since the cause of this crisis is the widespread violence in Syria, we call for an immediate end of all aid – lethal and nonlethal – to all combatants, an immediate and mutual ceasefire, and immediate negotiations among all the parties without preconditions.

With respect to the existing refugees, the lack of aid and support is disgraceful.  The UN High Commission for Refugees (UNHCR) claims that normal processing is 31 days, while in fact refugees wait up to four months, often without even tents for shelter.  UNHCR also charges a registration fee of $100.

UNHCR says that it is overwhelmed and has insufficient resources.  It should have facilities ready and waiting for new arrivals, and money should be flowing to the refugees, not from them to UNHCR.  In order to make this possible, donor nations should immediately live up to their obligations.  However, UNHCR also needs to be fully transparent, including an audit on the use and allocation of resources.

A lot of refugee care is happening at the individual level, as generous Lebanese and even Palestinian refugees in their camps open their doors with compassion to accommodate their Syrian brothers and sisters.  However, this support is often untenable over the long term and insufficient for the numbers of refugees, leading to makeshift camps that do not meet minimum international standards.  These camps often receive no supervision by UNHCR or any other agency for eight months or more.

In addition, the refugees become increasingly vulnerable to exploitation, including prostitution and human trafficking.  These conditions bring shame to the agencies and committees and their sponsors charged with refugee rights and support.  All refugees have a right to the basics of life and safety.  They must have immediate access to support services and adequate protection from abuse.

Lebanese citizens, Palestinian refugees living in Lebanon, Lebanese charitable institutions and other Lebanese civil society institutions deserve much credit for providing support that the international society has not done.  However, a refugee influx of this magnitude is more than any society the size of Lebanon can accommodate without massive aid from the United Nations and its constituent members.  It is a matter of urgency for them to make their actions match their words of sympathy and compassion.

The Mussalaha Delegation to Syria was a group of 16 human-rights activists from seven countries who participated in a 10-day fact-finding mission across Syria and Lebanon: